Monsoon rains in Melva, a village in the northwestern Indian desert, are watering crops and, for the first time, filling a new crop-irrigation cistern. Since early July, the seasonal rains have watered the thousands of small family farms that make up the backbone of the country’s rural economy. Two thirds of those farms don’t have irrigation, however, so even slight variations in rainfall can leave fields dry and cut crop yields.

With just a little extra water throughout the dry season, family farms can increase their yields and even grow new cash crops for extra income. The new cistern in Melva is part of a project that is demonstrating the concept to local farmers. Jay Pearlman, former chair of the IEEE Committee on Earth Observation, and J.R. Sharma, project director for the Indian Water Resources Information System, are leading the creation of a demonstration farm with an educational facility, a small rainwater harvesting cistern for household use, a large cistern for irrigation, crops and a weather station and other sensing equipment. The farm is the first step in an agricultural education program that will attempt to increase yields and change the kinds of crops that are grown in the region. And, by scaling up, it could ultimately transform agriculture nationwide, in spite of a lack of waterworks infrastructure to support irrigation. But to do so, Pearlman and Sharma would like some tips from the E4C community. 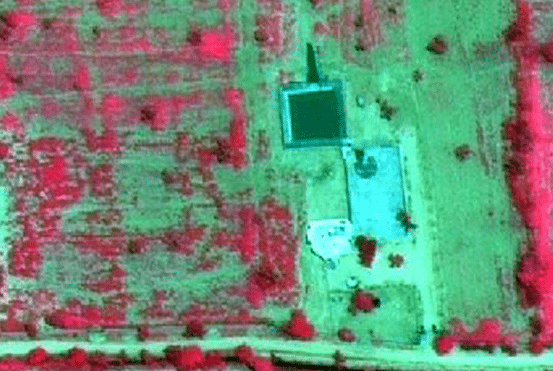 This aerial view shows part of the demonstration farm’s three-hectare plot, the large and small cisterns and the educational facility. Photo courtesty of Jay Pearlman

As a passive rain harvester, the cistern circumvents the region’s lack of reservoirs, dams, pipes and pumps to irrigate fields. It is simply a huge cement container dug into the ground, its top-most edge at ground level. It has a surface area the size of an Olympic swimming pool, and it holds 1100 cubic meters (290,600 gallons) of water. The area around the cistern is graded slightly to channel the rainwater in.

Covering the cistern has proved to be a problem. It is one of three issues that Pearlman and Sharma have identified that the E4C community may be able to solve. The other two are pumps and water-quality monitors.

The large cistern needs a cover to reduce the loss of water to evaporation. The ideal cover should have five qualities, Pearlman says: It should be low cost and locally available (in India), it should be able to withstand both high winds and intense sun, and it should last intact for at least one year, preferably more. The team has experimented with bamboo and plastic designs so far, but they are still looking for a solution.

The team is also experimenting with pump designs. These, too, should be low cost and resilient. Designs available in the region include treadle pumps, bicycle pumps and small solar pumps. “It would be valuable to compare all of these for poor rural operations and to look for alternatives,” Pearlman says. E4C’s solutions library has information on pedal pumps, and we curate water pump how-to’s and demonstration videos in this playlist on our YouTube channel. 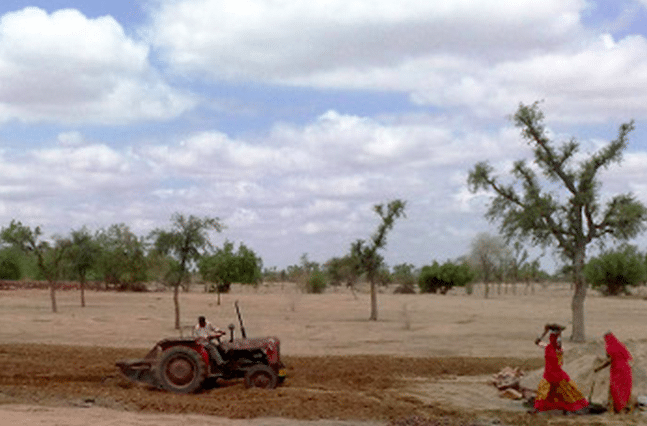 The cistern stores rainwater year round, so monitoring its quality will be important. Especially so in the smaller cistern for household use, which should be free of bacterial and chemical contaminants. Once again, cost is a factor in choosing the sensors to use and, Pearlman says, they should be disposable.

Old and new, side by side

The demonstration farm is a powerful teaching device. Now in its second planting season, it is showing farmers exactly what rainwater harvesters and irrigation can do by placing irrigated and non-irrigated fields side by side. There are also drought-resistant variants of the pearl millet and kidney beans that are the region’s staples planted right beside the traditional, less hardy species. Yields are two to three times higher in the new varieties.

Besides bigger yields, irrigation allows farmers to cultivate new kinds of crops, such as tree orchards. These cash crops can add new income to family farms and require only a fraction of the water that the staple crops need. Pearlman and Sharma calculate that cisterns of the size they have constructed can adequately irrigate family farms of two to three hectares year round.

For more information, and to share your insights for design improvement, please see the resources below. Pearlman and Sharma’s contacts are available in their summary document.

Water Has a Bright Future in Solar Pumps

A single weather event does not prove climate change, but the heatwave that is hitting much of the Northern Hemisphere this summer and triggering forest fires from California and Canada to Portugal, Greece and Sweden is focusing attention on the need to kick our collective carbon habit. Even without climate change, it just makes sense to transition from fossil to renewable energy sources. Take water pumping technology in rural areas...