Several years ago, Lia Marshall and a group of fellow undergraduate students lugged 10 to 15 pound microscopes in their backpacks between rural communities in the Amazon. The microscopes figured into a public health experiment that showed people the tiny organisms living in their untreated water.

“Having visuals like microscopes or pictures is very helpful in demonstrating why doing things (like washing hands) that are otherwise inconvenient are important,” Marshall told E4C.

Now, thanks to a young inventor called Thomas Larson and his stick-on microscope lenses for mobile phones, students retracing Marshall’s path through Amazon would have much lighter packs.

Larson began developing the lens as an undergraduate student of mechanical engineering at the US University of Washington in 2012. Last year, he funded the manufacture of 15x Micro Phone Lenses through Kickstarter, earning nearly $92,000, surpassing his goal of $5000. This year, he pulled off the same trick and funded the manufacture of a much more powerful lens that magnifies up to 150x. By the end of his Kickstarter campaign he had nearly $112,000, more than doubling his $50,000 goal. He now sells the 15x lens and presells the 150x lens from MicroPhoneLens.com. 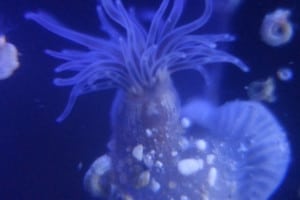 Larson is selling his lenses as educational tools, a hobby for children (remember your first microscope as a kid?), a field research aid and, yes, even as a potential water quality tester. In that way, the device may have a few interesting applications in global development. Lia Marshall calls the lens a great idea and she believes it might help in hygiene programs.

“It’s something we take for granted in this country that we are a taught from a very young age that things we can’t see can make us sick, so therefore we should wash our hands or make sure the water is safe to drink. That’s not the case in other countries, and trying to convince people is tough. Having visuals like microscopes or pictures is very helpful in demonstrating why doing things (like washing hands) that are otherwise inconvenient are important,” says Marshall, who is now a master’s student of environmental and forest sciences at the University of Washington.

In the future, the lenses might also serve health professionals taking blood or other samples in the field. Larson was careful not to mention medical uses of the lenses because Kickstarter has a no-medical-device policy. But he opened the idea tap with us.

“Using the lens for global health was, and still is, my primary interest in developing the tech,” Larson told E4C. The lens is untested as a diagnostic tool and testing should be a first step before using it to diagnose disease. But if it holds up, these are some possibilities.

Those few examples hint at the possibilities and in time we may see other creative uses of this kind of tool in mobile health and education. For more information please see microphonelens.com.

Are 3D-Printed Prostheses the Solution for Limb Loss in Low-Income Countries?

After hurricanes Irma and Maria tore through the Caribbean in 2017, devastating dozens of islands – including billionaire Richard Branson’s private isle, Necker Island – Branson called for a “Caribbean Marshall Plan.” He wanted world powers and global financial institutions to unite to protect the Caribbean against the effects of climate change. That hasn’t happened. So Branson and his government partners from 27 Caribbean countries hope that his celebrity, connections...

The Digital Divide: How Virtual Technology Can Help Close Gaps in Professional Training

The pandemic has changed working conditions across every sector and industry. Our homes have become places of work with social distancing restrictions forcing workers...