A low-cost solar fish pond aerator could boost yields in most of the world’s aquaculture operations. Most artificial ponds worldwide are on family farms and other small-scale operations in developing countries. There, traditional aerators that require electricity can be costly and impractical. This new device, created by a research team at the University of Toronto in Ontario, Canada, mixes pond water using heat from the sun. Its design sets it apart from traditional aerators as it requires no electricity, has no moving parts and can be manufactured and maintained locally from readily available parts.

“What happens in these ponds is you end up with lots of dissolved oxygen in the top layer of the pond, but sunlight doesn’t penetrate deep enough to get oxygen in the rest of the pond. Our device circulates those layers,” Amy Bilton, the Principal Investigator at the University of Toronto’s Water and Energy Research Lab who is leading the work, told E4C.

The problem with artificial fish ponds is that the fish die off if the water’s oxygen levels are too low. Fish are fickle and they can even get sick if there is too much oxygen. The ponds have natural oxygen generators in the form of phytoplankton at the water’s surface. These photosynthetic plants produce oxygen that dissolves in the water around them. But in the still fish ponds, no currents mix the upper and lower layers of water. That sets up a thin band of safe water for the fish and a fragile environment for their survival. The water near the top of the pond can become supersaturated with oxygen so that it releases the gas into the atmosphere. That high concentration can be toxic to the fish, while deeper down, oxygen levels are too low for their survival.

The Solar Updraft Aeration system, as the new aerator is called, sets up a convection current. As the sun strikes a plate on the water’s surface, the device channels its energy downward to heat the walls of a vertical metal tube and a flared base on the bottom of the pond. The water under the base and inside the tube becomes warm and expands, forcing it upward through the tube and out holes in the tube just under the pond’s surface.

Prototypes for the device have entered field tests in partnership with researchers at BRAC University in Bangladesh. With funding from USAID, the researchers are building and testing at least 80 aerators.

Studies so far suggest the devices could finally put aeration in reach for impoverished farmers. That could translate into more fish. A study of Chinese fish farms in 1995 found that aeration increased yields by nearly 50 percent. It’s not clear how these devices will compare to the ones used in the study, but the researchers do have some guesses about their aerator’s performance.

Modeled simulations suggest that aerators built with a vertical tube height of .5 – 1 meter, and a base flare length of .8 – 1.2 meters, could lift more than 1500 liters of water per hour.

Real-world measurements of a pond that is two meters deep found that the bottom layer maintains an oxygen level of 2 – 3 milligrams per liter, while the topmost layer fluctuates between 4mg/L at night when the phytoplankton are not producing oxygen, to 12mg/L during the day. Laboratory models based on those measurements suggest that the new aerator can raise dissolved oxygen in the lowest layer so that it fluctuates between 6mg/L at night to nearly 14mg/L during the day. If that is borne out in the real world, it may mean that aerators can mix the water sufficiently to create top-layer conditions throughout the entire depth of the pond.

We’re always looking at how to do things better. Since the pilot, we’ve made some substantial changes to them. They keep getting more efficient and effective,” Ms. Bilton says.

For updates on the project, please see the Water and Energy Research Lab’s site. 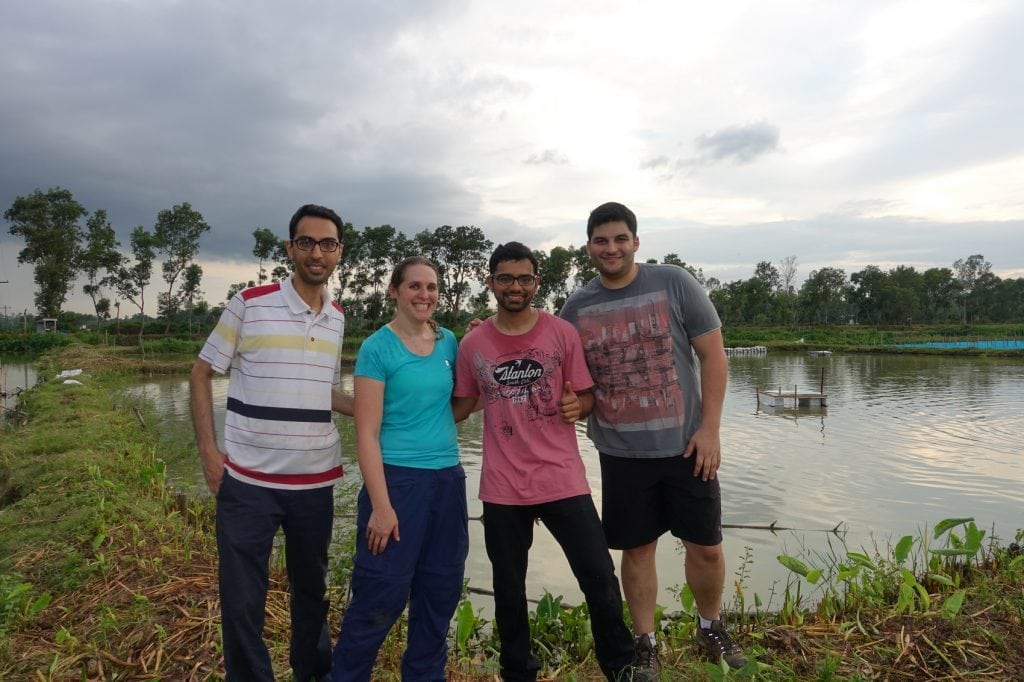 Join the Siemens Design Challenge for a chance to win one of two $10,000 first-place awards. Bob Rabatsky has tapped into his lifelong experience scaling agricultural technology in emerging markets to deliver these succinct insights into the design of innovations to minimize post-harvest loss. Mr. Rabatsky began his career in the 1970s as a Peace Corps volunteer, teaching at a technical agricultural institute in the Democratic Republic of the Congo...