It’s easy to forgive indecision when it comes to donating to a worthy cause in India. A bird’s eye view shows at least 3.3 million nonprofit organizations in the country, with many more hidden under a fog of bureaucracy. That’s about one for every 400 people in India, which is a lower rate than that of a developed country like the United States, but with 1.3 billion people, the absolute number of NGOs puts India near the top of the list worldwide. Added to the sheer quantity, there is suspicion that about half might be misusing funds, according to NGO watchdogs. With those uncertainties in mind, what is a kind-hearted donor to do?

A new startup has a solution. Giving Rise is an online platform that hand-picks Indian charities, presenting them as causes to interest the charity-minded.

“It’s an online giving platform that makes retail giving easy, uncomplicated and just takes the hassles out of giving to India,” says Ashish Shah, founder of Giving Rise. “The reason I started thinking about it is, frankly, personal frustration. Living in the US, I found it really hard to give to businesses and organizations in India that I cared about. It was hard to find out about causes and there was hardly any platform for giving. There are crowdfunded appeals from a friend or family member, but there was no rigor behind choosing the organizations.”

It’s a smart and different approach to philanthropy that encourages a long tail of giving—Khanjan Mehta, director of the Mountaintop Initiative at Lehigh University

Each organization that Giving Rise features has been vetted twice. First, they pass multiple rounds of evaluation by Dasra, an organization in Mumbai, India, that rates the impact, financial health and long-term viability of Indian non-profit organizations as a service to social impact investors. Dasra’s far sightedness yields a set of metrics that may seem surprising to many of us who attend mainly to an organization’s impact.

“What we’ve realized is that you can’t focus only on the program,” says Vishal Kapoor, Dasra’s associate director of strategic philanthropy. “Institution building, capacity building is critical to ensure that the programs grow.”

Then Giving Rise adds a second layer of vetting.

“I personally wanted to meet with the management and do a site visit,” Ashish Shah, Giving Rise’s founder says. “I want to know some of their team members and understand myself how they do what they are doing. Why a certain intervention is better than another, why they are working where they are working,” and so on.

What we’ve realized is that you can’t focus only on the program. Institution and capacity building are critical to ensure that the programs grow—Vishal Kapoor, associate director of strategic philanthropy at Dasra

The vetting is important, but so is the ease of giving. To Mr. Shah, it seemed that Indian organizations tended to target wealthy donors with fundraising galas and exclusive opportunities while middle-class regular folks were left on the wrong side of the velvet rope.

“Giving Rise works at a higher level of abstraction because many people don’t care about or don’t know enough about specific solutions and approaches,” says Khanjan Mehta vice provost for creative inquiry and director of the Mountaintop Initiative at Lehigh University in Bethlehem, Pennsylvania (USA). It’s a smart and different approach to philanthropy that encourages a long tail of giving, Dr. Mehta says. 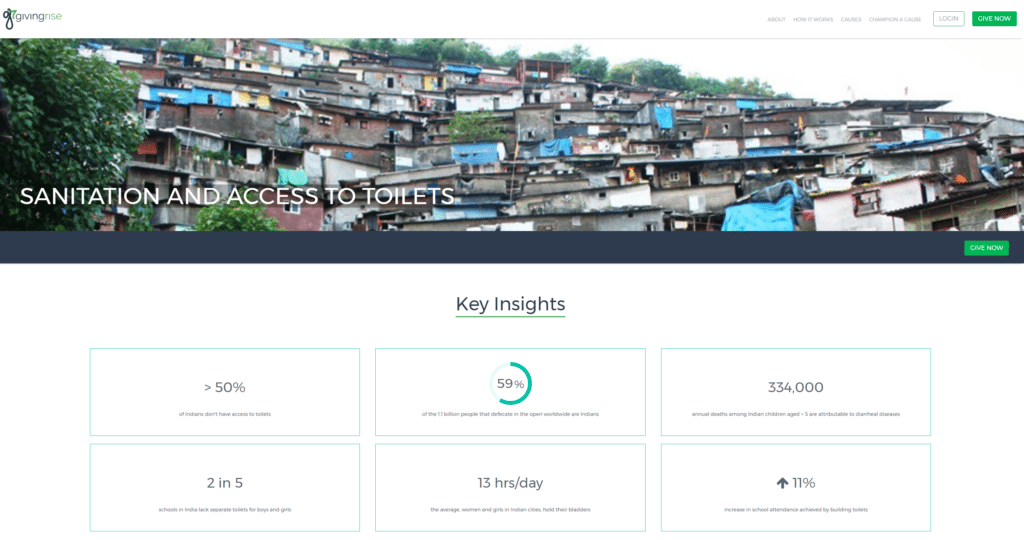 This screen grab from givingrise.org shows the start of the Sanitation cause page.

Rather than listing thousands or even dozens of organizations, Giving Rise offers donors four choices now, with about twice that in the pipeline. The E4C community will recognize one of the causes available for support, Sanitation and access to toilets. Others include childhood nutrition and prevention of early marriage and sex trafficking. The page for each cause outlines the problem and some of its solutions, then presents an organization that has passed the vetting process.

Giving Rise doesn’t take any of the donated money for its own operations. Rather, Mr. Shah accepts donations for his service and he is also looking to grant makers to help keep his doors open. His platform removes much of the uncertainty of giving to Indian organizations and makes it easy for anyone to give even a little to causes that matter.

How Buildings in Johannesburg Could Benefit from Green Roofs

There are about 500,000 square metres of green space in Chicago in the United States. Many of these are visible, not on the ground, but on building roofs across the city. Green roofs can be seen in a number of other cities around the world. Green roofs are usually installed on flat roofs with vegetation planted in a growing medium on top of waterproofing, root barrier and cuspate sheeting. The...