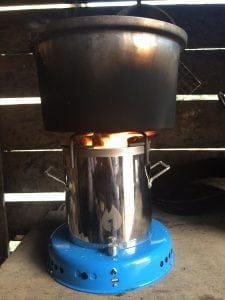 Traditional cooking practices in the developing world contribute to poor health, environmental degradation, and poverty. Today, about three billion people around the world cook using simple stoves (often three big stones, open flame with pot on top) fueled by biomass (organic fuel) typically from wood, charcoal, or dung. Based on 2012 WHO data, over four million people die each year from the exposure to the indoor air pollution created by these inefficient, smoky stoves. That means more people die each year from respiratory illness than do those from diarrheal disease! And the health impact, not to mention the time consumed by collecting firewood, disproportionately affects women and children.

Thankfully, there is change in the air. The international development community and local innovators have turned their attention to the issue in the last several years, and there have been significant improvements in cookstove technology. Using the new ACE 1 stove developed by African Clean Energy, Samaritan’s Purse has launched a new project in Northern Cambodia to tackle indoor air pollution. The ACE 1 solar biomass energy system is among the cleanest and most high-tech stoves currently available, providing clean cooking with a range of biomass fuels as well as offering solar electricity for mobile phone charging and LED lighting. The burn chamber becomes a gasifier, saturated with oxygen pulled in from the base by a fan. Everything burns, even particles that would normally escape as smoke. The stove reduces smoke emissions to negligible levels, a fact independently verified by a third-party evaluator, The Berkley Air Monitoring Group.

The ACE 1 solar biomass energy system is among the cleanest and most high-tech stoves currently available.

ACE manufactures the ACE 1 unit in Lesotho and imports to Cambodia. They have set up a local distribution and sales team targeting the provinces immediately around Phnom Penh but, as with any business, it takes time to scale-up. They hope to begin manufacturing directly in Cambodia to serve the ASEAN market in 2018.

A new way to distribute: The Stove Auction

For now, however, they rely on a unique implementation model. The ACE 1 stoves, as well as three other improved cookstove models, are available for bulk purchase through The Stove Auction in Cambodia. Their sale on the auction is subsidized by SNV and C-Quest Capital. The ACE 1 retails for (USD) $98, but it sells for $52 at auction. SNV pays the difference between the final bid price and the manufacturers bottom line. This way, manufacturers like ACE are guaranteed a fair price for their product that enables them to run their business while also lowering the cost barrier for Khmer entrepreneurs. The auction has been set up to stimulate the emerging market for improved stoves in Cambodia, bridging the gap between manufacturing and marketing and sales.

Manufacturers like ACE are guaranteed a fair price while lowering the cost for Khmer entrepreneurs.

The auction allows ACE to move a larger volume without expanding their own operation. They are a social enterprise so their goal is sustainable impact; they don’t view the local entrepreneurs and other cookstove models as competition but as contributors toward the same goal. Of course, it’s not entirely altruistic. There is a pragmatic consideration in that entrepreneurs who buy stoves through the auction and sell in communities are helping to create awareness and build demand.

No giveaways: A lesson learned from past mistakes

Financing is also available for end users not just distributors who purchase through the auction. Stoves are sold using a payment scheme typically arranged at $25 down and $7 per month for 12 months. As such, there are good margins built in to run a profitable business for entrepreneurs and for NGOs to support programming costs.

We cannot do to stoves what the NGO community did to water filters 20 years ago in Cambodia.

Samaritan’s Purse made the decision to sell the stoves rather than distribute them for free. We are taking this course for two reasons. One, the auction contract prohibits free product distribution, and two, it aligns with good development principles. We may consider a subsidy for very remote tribal groups along the northern border, but even that takes some consideration. We cannot do to stoves what the NGO community did to water filters 20 years ago in Cambodia. Organizations, ourselves included, gave away water filters and undermined the market. A sales- and support-based approach to programming, rather than distribution and training, ensures that the market for improved cookstoves is not undermined and that NGOs do not become a competitive threat to Khmer entrepreneurs.

The role of non-profits

But the demand for new stoves will not be created by the for-profit sector alone; there is a role for NGOs to play. Non-profits are needed to educate families (particularly women) about the health risks of smoke exposure, help calculate existing cooking costs and determine a reasonable purchase plan, as well as to provide on-going service, follow-up support, and training on safe food preparation and nutrition. Most families opt for a payment scheme with a deposit and monthly installments over a one-year period. They see savings within the first eighteen months, while the health impact is instantaneous.

Our exit strategy for the project is to transfer the sales, support, and payment facilitation over to local cooperatives.

Our work is an example of the non-profit role. We work in remote communities along the Laos border where it will be many years before any entrepreneurs pop up. (The market is just opening up around Phnon Penh and it will grow outward from the urban centers, so there is no conflict with our program.) Next, our stove program is running alongside a WASH project that provides families with a bio-sand water filter and latrine as well as health and hygiene training. Finally, our exit strategy for the project is to transfer the sales, support, and payment facilitation over to local cooperatives. We have already helped to start small savings groups in these communities and some begin to sell products like bottled water and gasoline. The stoves can become another product that they offer so that all proceeds are going back into the member-owned, community-based groups.

In a country where 89 percent of families are using wood and charcoal, there is a burgeoning opportunity to effect change on the health of the nation. We are following on the success of French NGO, Geres, who in 1997 introduced the New Laos Stove to Cambodia. Twenty years later, rural areas are saturated with this improved cooking method. But those stoves are prone to breakage. While surveying families about their current costs of cooking, we learned that they purchase three or four New Laos Stoves every year.

Fortunately, technology has improved. It is time to help the Khmer people climb to another rung on the development ladder by getting cleaner and more efficient cookstoves into their homes. This goal will take collaboration between the for-profit sector, NGOs, as well as engineers to continually improve the technology of these stoves. 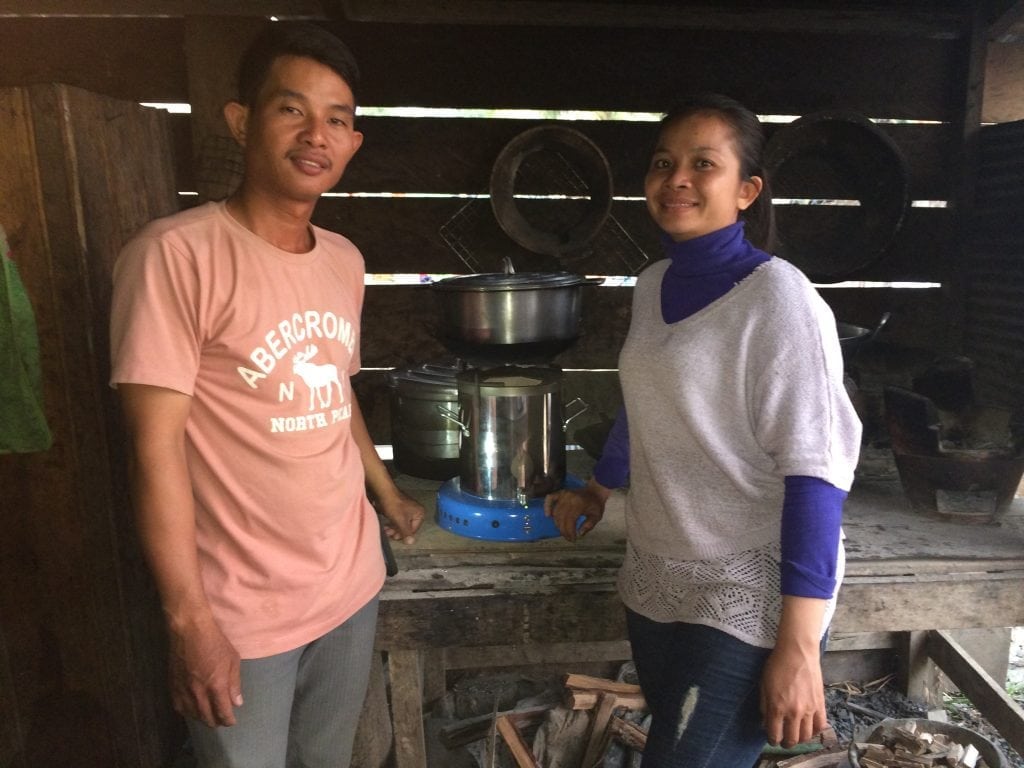 These are the first people to buy a new ACE 1 stove through Samaritan’s Purse’s program.

Ten years ago, off-grid solar power wasn’t even a blip on the radar. Thanks to significant advancements in solar technology and plummeting costs, solar generation now rivals established fuel technologies as a cleaner, more economical choice. And a few notable success stories like M-Kopa in Kenya and Off-Grid Electric in Tanzania have put off-grid solar on the map as a viable way to combat global energy poverty with climate-friendly technology....