Ten things to put in your emergency kit

Hurricane Sandy is blacking out homes on the US East Coast and a tsunami warning worried people on the West Coast and Hawaii over the weekend, which got us thinking about emergency kits. Fortunately, some of the same technologies that we promote in developing communities can also make disasters bearable in developed countries. And preparation can save lives, turning disasters from mortal threats to nuisances

These are ten things to put into an emergency kit. 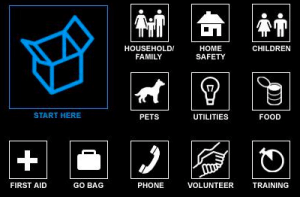 A screen shot from 72hours.org.

Start your preparations with a plan. Figure out how to communicate with the members of your family who might not be together when the disaster hits, decide where to go and what to do during each different kind of disaster, keep copies of legal documents in a safe place, among other strategies.

Two sites can help you with your plan: Ready.gov and 72hours.org 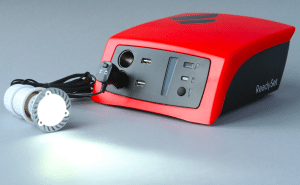 ReadySet and the LED lamp included in its kit. Photo courtesy of Fenix International

There’s a hurricane on but that doesn’t mean you can’t keep listening to your mp3s. Not to mention keeping your phone charged to let the relatives know you’re fine. A huge array of options exist to make power during black outs, and many of them are from start-ups selling power generators to off-grid communities in developing countries.
Fenix International sells a rechargeable battery that holds 15 watt-hours of power, bundled with a 15-watt solar panel. And, coming soon, it may also have a bicycle-powered generator. The company sells its batteries in African countries and in the United States.
The American Red Cross makes a series of hand-crank USB chargers for cell phones and even small laptops. They include LED lamps and radios built in.

And there’s always DIY. Here’s a tutorial on how to build a solar panel using fragments from broken panels. 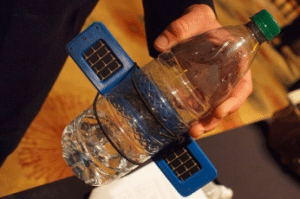 The average clear plastic bottle left in sunlight can safely disinfect water with this solar water disinfection indicator that gives a green light when the water has had enough exposure. Photo by Rob Goodier

Innovation in water treatment is pouring out of communities in developing countries, where waterborne illness takes nearly two million lives per year, and many of them are children younger than age 5.

In case the tap dries up during a disaster, one of the simplest solutions is a bottle of chlorine bleach. Add 15 drops with an eyedropper to a gallon of water to kill disease-causing microbes. And bleach doubles as a disinfectant for first aid.

Other options include solar disinfection, a solar still, ceramic filters, making your own filter out of sand, charcoal and cloth, and a clever filter on which we reported recently, the packed particle bed. 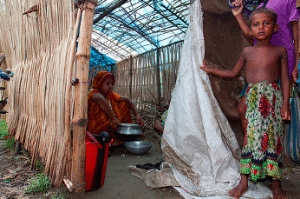 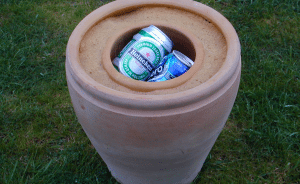 This flower pot evaporative cooler can keep food and drinks chilled on cookouts and camping trips. Photo by tim_n / Instructables.com

You should store enough food to last three days. Try canned goods and dried foods. A solar dehydrator could  help prepare foods for storage. These devices are boosting profits on family farms in developing countries, where they can extend the life of perishable produce and allow farmers to process their own food.

If the power goes out, you could be the only one on the block drinking cold soda if you build an evaporative cooler. And if you’re serious about keeping your things cold at all costs, consider a solar-powered refrigerator. Solar fridges preserve vaccines at clinics and in transport in areas where power is intermittent or unavailable. 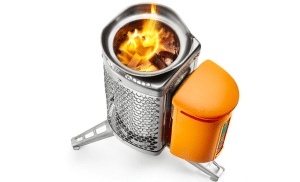 
Stoves are hot now (pun intended) in international development where the goals are to make them affordable, burn cleaner, more efficiently and mimic the local cooking methods already in place. Hundreds of stove designs have sprung from those parameters. We’ve reported on dung-burning stoves, a stove with a thermoacoustic electricity generator, rocket stoves, an anagi clay stove, biogas stoves and solar cookers that store energy to work at night.

Biolite makes an interesting solution for household emergency kits. The Biolite CampStove cooks and charges devices. It burns wood and other biomass and it has a USB charger that provides two watts of power at five volts from a thermoelectric generator. 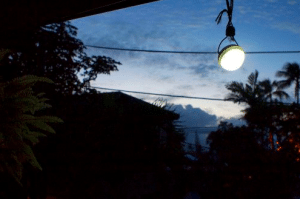 This Nokero solar light charges by day and lights this porch for a few hours every night. Photo by Rob Goodier

Lights in developing countries can affect students’ report cards and businesses’ bottom lines. In off-grid homes, solar-charged lighting and other technologies allows students to study and small businesses to stay open past sundown. Organizations such as SunTransfer, Barefoot Power and D.Light, to name a few, take solar light to off-grid communities. Lights are also a staple in emergency kits.

Nokero’s simple, durable lights charge by day and can turn on automatically at nightfall. They’re also decorative. Lines of Nokero bulbs dangled above the patio at our networking event last year (here’s a shot of it in our Flickr photostream). 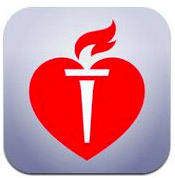 
This is the mobile phone app that kept Dan Woolley alive for 60 hours when he was trapped under rubble in Port-au-Prince following the earthquake in Haiti in 2010: Pocket First Aid and CPR, by Jive Media. The app shows you what to do with text, illustrations and videos. The Red Cross also has a well-recommended first aid app, and disaster preparedness apps. 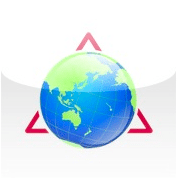 To supplement your hand-cranked emergency radio, disaster preparedness apps for mobile devices can provide news updates, scan police radios, find missing loved ones and even help you make a response plan and other preparations. Among the Red Cross’s preparedness apps, the organization launched a hurricane app for phones. And the Red Cross’ Shelter View shows where to find relief shelters during a disaster. FEMA launched a disaster preparedness app last year. There’s also bReddi, and the Pacific Disaster Center’s app, which includes an interactive map of ongoing hazards around the world.

Scan police, fire and weather radios from around the world with this Android app. And this app on iTunes also scans police radio.

Google Crisis Response isn’t a mobile app, but it’s a simple tool that puts Google’s people-finder, maps, news and information on where to donate all in one spot.

A serpentine solar water heater, featured in our Solutions Library.

A solar water heater isn’t a necessity, but it can make for hot showers and good hygiene, and warm water for coffee and tea. You’ll find a serpentine heater in our Solutions Library.

The supply of critical materials has emerged as a theme in the transition to clean energy. The manufacture of electric vehicles, solar photovoltaic panels and wind-power generators requires more minerals than their equivalents that consume fossil fuels. The critical minerals needed include copper, lithium, nickel, rare earths, silicon and others. The issue raises questions regarding the feasibility and speed of energy transition, the economics and the geopolitical consequences. Strategies exist...