What are the ethics of humanitarian technology? 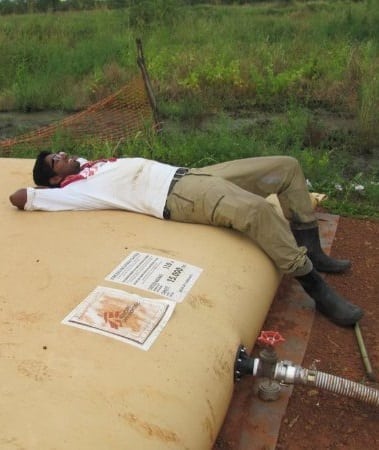 [This article is adapted from an interview of Dr. Syed Imran Ali by Professor Daniel Oerther.]

Imran is a Development Impact Lab postdoctoral fellow training at the Blum Center for Developing Economies at the University of California in Berkeley. He delivered a thoughtful talk on the ethical obligations of humanitarian engineers at HumTech, which is the Humanitarian Technology conference held in Cambridge, Mass.

Imran presumes that engineers have a moral obligation to help, but he questions whether we are all offering our assistance in a manner that meets the professional obligation to “first, do no harm.”

The talk included a paper that elucidates his ideas and I recommend it to anyone working in the field. It’s called Engineering in Solidarity: Hybridizing Knowledge Systems in Humanitarian and International Development Work, in Procedia Engineering.

Are engineers always offering assistance in a manner that meets the professional obligation to “first, do no harm?”

I wanted a better view on the issue from Imran’s perspective so I asked him about his background. Imran grew up in Toronto, Canada, as the descendant of Muslim immigrants who had been displaced from India during the partition of 1947. He attended Queens University, where he earned a baccalaureate degree in geological and environmental engineering, and subsequently he enrolled at the University of Guelph to pursue a doctorate in environmental engineering under the guidance of Professor Kevin Hall.

During our chat, Imran recalled, “I was interested in public health since an early age. My family would visit Karachi often when I was a kid. During the monsoons, the roads would flood, including the open sewers. The homes in the poorer parts of the neighborhood would be inundated and people would get sick. I got sick too, so I knew what it felt like. I started connecting these experiences to the statistics we hear about the global disease burden attributed to poor water and sanitation. That’s why I started to study environmental engineering.”

Early in his graduate studies Imran’s research took a turn. The 2007 surge of the Tamil Tigers in Sri Lanka disrupted his work to explore desalination of tsunami contaminated ground water sources, and he was left looking for an alternative project. Imran was able to transition his research to look at water and public health in slums and launched a research collaboration with the Indian Institute of Technology, Madras.

If we do not have the capacity to go beyond the symptoms to directly contend with the roots, this may mean we have to continue our work while testifying to how the situation arose and the ways in which our response is inadequate.

From 2007 through 2011, he worked to develop a decision support system to evaluate two critical questions: first, should a point of use or a community-level treatment system be employed to provide clean drinking water in urban slums; and second, what specific technology should be employed. Published in June of 2012, Imran’s dissertation is entitled, Design and Case Study Application of a Participatory Decision-making Support Tool for Appropriate Safe Water Systems Development in Marginalized Communities of the Global South.

While he was in the midst of his doctoral studies, Imran learned first hand about the desire to put his technological training to practical use. The monsoon floods in 2010 directly affected more than 20 million people in Pakistan. More than 2000 people died and the damage took as much as a $43 billion out of the national economy.

“They wouldn’t let me in the front door, so I had to climb in through a window,” Imran recalls with a smile. “When I called headquarters, they didn’t know what to do with me so I was redirected to the country office. They needed an engineer right at that moment, so two days later I landed in Pakistan and started to operate a 10,000-liter per day filtration unit to produce clean drinking water. They asked me if I knew how to operate the system, and I told them I was an engineer and I could figure it out!”

There has been too little thoughtful consideration of how to live by the Amerindian proverb, “Never criticize a man until you’ve walked a mile in his moccasins.”

That moral imperative – to figure it out – serves as the central question for Imran’s forthcoming paper in, “Procedia Engineering.” Imran believes that, “engineers have a unique and powerful role to play in solidarity with communities… By translating between technocratic-bureaucratic and local-traditional knowledge systems…”

The recent explosion of programs linking engineers to the world’s financially and physically impoverished has unleashed a tidal wave of good intentions. The prototypical, technically savvy Westerners have provided water filters, water systems, schools, bridges, roads, and more to communities around the world. And while there are few doubts that the needs for physical infrastructure are real and that the expertise provided is technically sound by Western standards, there has been too little thoughtful consideration of how to live by the Amerindian proverb, “Never criticize a man until you’ve walked a mile in his moccasins.”

I find these words worthy of careful pause and reflection. As technical experts, our focus is so often on the “how” of a solution while we fail to consider the “why.”

Imran raises the central importance of professionalism as a guiding principle to our work.

“And as I reflect on the wonderful success of HumTech2015, I expect that next year we may see a further expansion of the discussion. Perhaps HumTech2016 will offer a new panel with a focus on the ethics of humanitarian technology? I would personally look forward to hearing from that panel, as I believe that I could learn much that would benefit my professionalism as a humanitarian technologist.”

An interview with Dr. Imran Ali by Socially Engaged Engineering

Lean Manufacturing of Disease Screening Strips: How a Stamp Simplifies the Process

Using paper, a couple of assays and a simple foam stamp, a new manufacturing technique can make disease screening strips more affordable. Treatable diseases often go undetected in developing countries due to the high cost and scarcity of screening technology. Many treatable diseases, like diabetes and urinary tract infections, can be detected via urinalysis, or analysis of urine. While urinalysis test strips are commonly used in developed countries, they are less practical for...