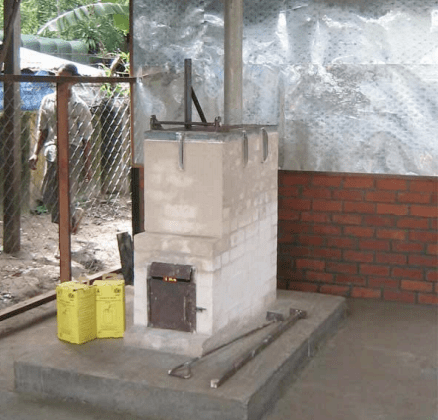 The De Montfort medical waste incinerator reduces all medical waste added to ash and flue gases, including dressings, plastics, and organic matter. Needles may not all be reduced though they will be sterilized. The De Montfort incinerators were designed by Professor D.J. Picken, over a period of about 8 years from 1996 to provide a low-cost and effective incinerators which could be built in almost any developing country.

WHO, MSF, the British Council, UNICEF, the Salvation Army, Technology Without Borders

Mark 8a model  ~250-1,000 USD for materials, depending on the availability of refractory bricks

Mark 9 model ~500-1,500 USD for materials, depending on the availability of refractory bricks.

Competitive landscape Similar products available on the market. May not be a comprehensive listing.

Other medical waste incinerators, including the T4T Mak IV Incinerator.

The Mark 8a is designed especially for most healthcare facilities, while the Mark 9 is designed for larger hospitals (more than 300 beds)

User Provision Model Where can the product be purchased/acquired by end users?

The designer, Professor D.J. Picken, provides schematics online so the incinerators can be manufactured locally using the provided schematics. NGOs have used these designs.

Distribution to date Number of units that have been deployed, downloads or users to date

Fields marked are sourced values that have been evaluated by the manufacturer or a third party, all others are design specifications.
Capacity (kg)

Mass of waste the incinerator can process in each cycle

Type of energy used for operation

The run-time for cycle process

The De Montfort Mark 8a has a capacity of 12 kg/h and takes 3-4 days to build. There is a concrete foundation of L x W x H = 2 m x 2 m x 0.15 m and refractory bricks of L x W x H = approx. 230 x 110 x 65 mm (the mortar is refractory cement (high alumina)). The body will have 13 layers. Other components include the top frame, loading door, ash door, chimney, shelter, and outer wall. The instructions for this model can be found here.

The De Montfort Mark 9 has a capacity of 50 kg/h and takes 5-6 days to build. For the foundation, a concrete platform of at least 3 m x 2 m x 150 mm thick should be prepared on the chosen site, ideally with a roof about 3 m high to protect the incinerator and the operator from weather. The body will have 14 layers. Other components include the top frame, loading door, ash door, chimney, shelter, and outer wall. The instructions for this model can be found here.

List of materials and their dimensions for the Mark 8a and Mark 9 are here, respectively: 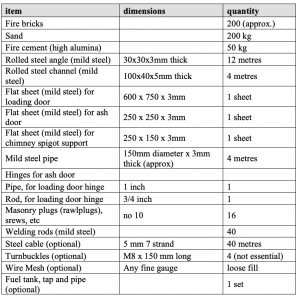 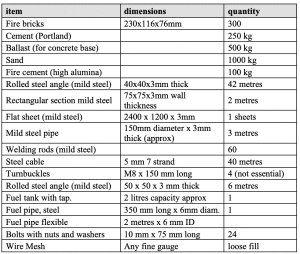 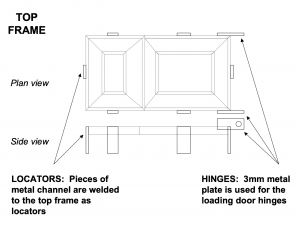 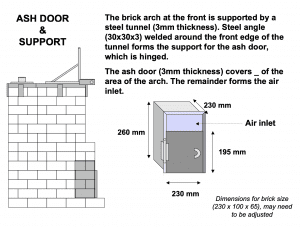 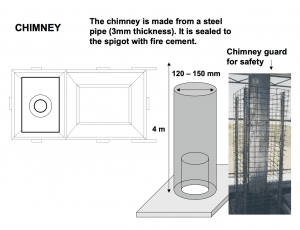 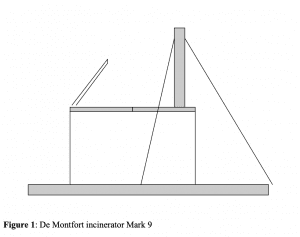 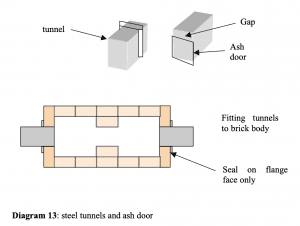 Technical support is provided in an operation manual and maintenance instructions, otherwise users are expected to maintain the incinerator on their own.

The chimney, chimney support plate, sand seals, ash door, and bricks all need to be maintained and replaced as needed.

The incinerator was designed to meet the criteria of a temperature of above 800oC with a residence time of over 1 second.

The original (Mark 1) incinerator had been tested by CSIR, in South Africa, in December 1999. Representative samples of waste from a typical primary health care centre were prepared by the South African Department of Health at the CSIR testing facilities. The principal findings were: “The medical waste tested in the trial was rendered non-infectious, the syringes were destroyed and the needles were rendered unsuitable for use. The emission of particulates, metals and chlorides comply with South African regulations for primary health care clinical waste used in the South African trials on small scale incinerators and the fuel to waste feed conditions for the tests. The combustion efficiency does not comply and the organic emissions are higher by a factor of at least 20 times.” The author noted that the test had been carried out at temperatures below 600°C, and that an undue quantity of wood was burned during the tests, which contributed to the high organic emissions.

The next test was of a Mark 2 incinerator at the De Montfort University and was reported by DJ Picken in January 2001. The principal findings were: 1. “The combustion chamber temperature was above 800°C for most of the test; 2. For most of the running time there was no visible smoke emission. Only rarely did the smoke level exceed that which is considered acceptable in a diesel engined road vehicle; 3. Such smoke as was collected proved to contain only carbon. No metallic elements were present; 4. The flue gas was found to contain virtually no dioxins or furans. 5. Oxygen level in the flue gas varied between 4% and 16% 6. Carbon monoxide level was mostly in the region of 100 ppm, with levels above 400 ppm occurring only rarely.”

A third test was carried out on the Mark 3 incinerator in the presence of observers from Médecins Sans Frontières in December 2000. Again the results were reported by DJ Picken. This test was carried out to test the efficacy of the incinerator to burn wet textiles as well as general clinical and household waste. The principal results were: “In all cases, at least one of the temperature zones through which the flue gas had to pass exceeded 800°C. CO could not be measured precisely at this low value. O2 levels fluctuated depending on how recently the load door had been opened, and the type of load. Rate of burning was very high, in the region of 50kg/h, again depending on load material. This meant that loading had to be very frequent, in the region of every 5 minutes.”

For the fourth test, a Mark 8a incinerator was constructed at a site in Leicestershire and 8000 hypodermic syringes were sent to the site by WHO. Casella CRE Emissions of Cheltenham were engaged to sample and analyze the exhaust gases, and the incinerator was operated by the designer and a technician. Two 2-hour tests were carried out, one at maximum loading rate, and one at a loading rate designed to limit smoke production. Loading rates, temperatures and smoke levels were recorded as well as the gas samples. In both cases none of the 12 dioxin-like PCBs targeted were detected in the samples collected, although detection limits were substantially higher than usual. In both tests, the temperature of the gas path reached 800°C for nearly the whole test. Smoke levels were unacceptably high for test one where loading rate was at a maximum, but lower for test 2. Other chemical detection can be viewed in the report.

A WHO assessment of De Montfort Incinerators in Tanzania found, “Out of 26 incinerators found during the assessment only 2 (7.6%) were not De Montfort models. Keeping De Montfort incinerators functioning appeared to be the main challenge. The study found that out of the 24 incinerators assessed, 7 (29%) were had not been operating for a period varying of 2 months to 3 years, mainly due to structural defects, which seemed caused by the non-adherence of contractors to use recommended construction materials, and particular specifications and designs for De Montfort incinerator to operate properly and at the right temperature. The study revealed that all of the 7 non-functioning incinerators had been constructed of burnt bricks obtained locally rather than the recommended firebricks.” Toxins released can be viewed in the report.

Safety Potential hazards / risks related to operation of this product

These incinerators, even if they are properly operated, emit significant levels of dioxins and furans, 40 grams of Toxic Equivalent (g-TEQ) in air emissions and in ash residues per kilotonne of waste burned.

The designer states that the incinerator will not render all flue gases smoke free, and will not meet clean air requirements in all situations with all loads. When burning waste, particularly infectious waste, an operator must be in constant attendance. It is not suitable for short sharp burns with no warm up period. It is not suitable for operation in a closed room. Smoke will be emitted whenever the loading door is opened. A roof may be fitted to protect the operator from rain, but only minimum walls. Operation and maintenance instructions are found here.

Complementary technical systems Performance of this product is improved with another technology (eg. Cookstoves and Wind-blocking skirts)

Compliance with regulations Product certifications and standards referenced by designer/manufacturer

The manufacturer evaluated the incinerator and states when properly operated it will achieve 800°C for at least one second and provides these disclaimers. Links to laboratory testing for air pollutant emissions is found here.

You can use the form below to contribute a photo of this product.

Please let us know your experience in using this product through comments below.