The accolades mount for Arpit Dhupar, who has collected two awards in two months for his work developing soot scrubbers that can turn India’s air pollution into t-shirts and graffiti. He attributes some of the success to a boost from Engineering for Change.

Arpit began work on the scrubber after hearing that the air in Delhi is so choked with fumes that simply breathing for a day is like smoking 10 cigarettes.

“As a mechanical engineer, I thought there must be an engineering solution,” Arpit told E4C.

inC by Catapult Design on Sketchfab

He had an idea for how to clean up the air and turn the soot into art. Arpit’s invention scrubs soot from the telecom industry’s diesel-powered back-up generators. Diesel generators keep the city’s cellphone towers humming even during blackouts, and they are among the worst polluters. In 2011, Delhi’s diesel generators spewed 382 tons of carbon dioxide and 2123 tons of particulate matter into the air, one study found. And the problem is worse nationwide.

Arpit founded Chakr Innovations to develop a soot scrubber that attaches to the generator’s exhaust manifold. The scrubber captures about 70 percent of the particulate matter, trapping it in a liquid solution for safe removal and transport.

Rather than simply disposing of it, Arpit and his team have hit on a way to turn the carbon solution into a new product. The Chakr team converts the liquid soot into ink and paint. They have used the ink to printed t-shirts with clean-air slogans, such as “This shirt is printed with pollution.” A graffiti artist has used the liquid soot to paint murals around Delhi, and Dhupar envisions other uses for the pigment, including construction and car tire manufacture.

Arpit and his team developed prototypes of the hardware, but they needed money, advisors and recognition to test, refine and lend more credibility to their product. That’s how E4C has helped.

Browsing Facebook one day, Arpit saw E4C’s post calling for applications to the Innovation Showcase by the American Society of Mechanical Engineers. He entered the Chakr scrubber and system for monetizing the pigment. Arpit made his pitch to iShow’s judges, passed two rounds of elimination and won one of the top three prizes in India. In April, Chakr and two other startups in India won $15,000 in grants, plus engineering review and design consultation.

The pitch is integral to iShow. Before offering his winning presentation to the judges, Arpit honed his speech, slides and general delivery with two advisors from E4C. 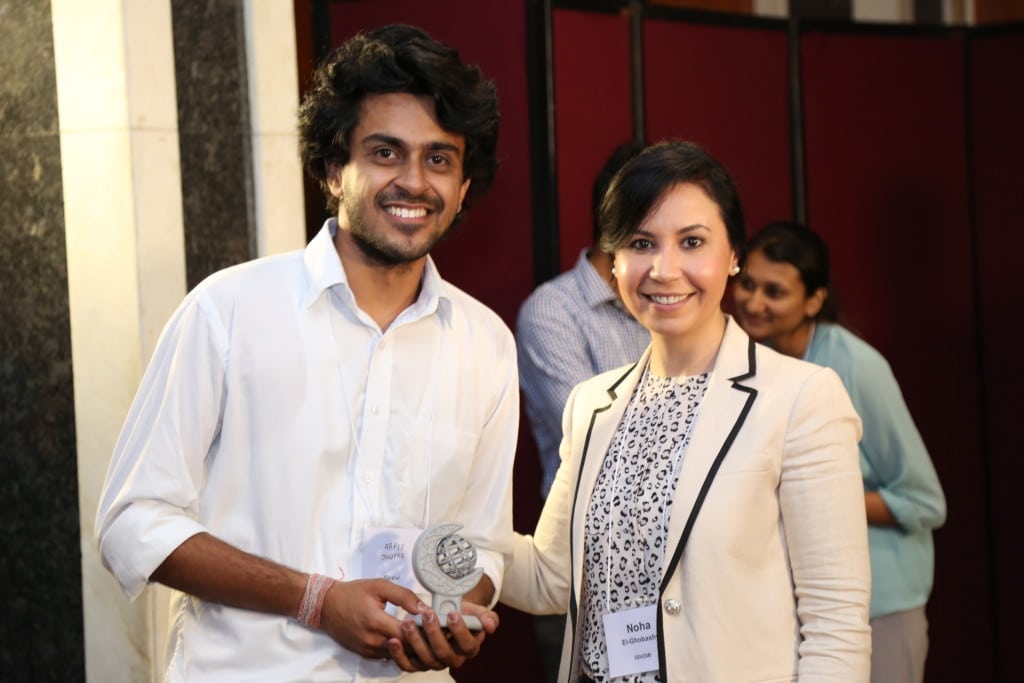 Two months after his success at iShow, Arpit made his pitch to the India Innovation Growth Programme. IIGP is an innovation accelerator headed by the Indian government, Lockheed Martin, Stanford Graduate School of Business and others.

“I am delighted to tell you guys that our startup was ranked at 3rd position all across the nation,” Arpit says. He was gracious to attribute some of that success to E4C.

“One of the judges said that they had placed us among the bottom 10 startups by reading our concept note, and it was the presentation that made them reconsider our case and shift us to the third spot. After hearing this, all I could think of was you guys! It was your valuable feedback that made the pitch deck presentable,” Arpit says.

We appreciate his kind words, but Chakr’s accolades are well deserved. Arpit started the process with a solid pitch and a gripping visual presentation. Some of that is in display in the iShow pitch video below. Congratulations to Arpit and the team at Chakr.

Ten things to put in your emergency kit

Hurricane Sandy is blacking out homes on the US East Coast and a tsunami warning worried people on the West Coast and Hawaii over the weekend, which got us thinking about emergency kits. Fortunately, some of the same technologies that we promote in developing communities can also make disasters bearable in developed countries. And preparation can save lives, turning disasters from mortal threats to nuisances These are ten things to...