E4C Turns 10: A Decade of Growth Leads to a Decade of Action 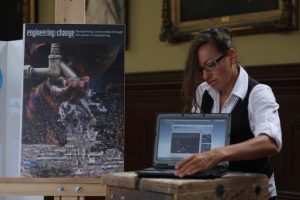 Iana Aranda, now President of Engineering for Change, introduces the organization in 2010 to attendees of A Better World by Design at the Rhode Island School of Design.

Engineering for Change turns 10 this year, and we consider the milestone as the halfway mark between two decades of action. “Action” describes our growth over the first decade, and the word defines the work that we all have ahead of us in support of the United Nations’ 2030 Agenda to meet the Sustainable Development Goals.

In 2008, the leadership of the American Society of Mechanical Engineers posed a question for its staff and volunteers. They asked how the society could use the Internet to engage engineers in solving the problems of global poverty. Over the next two years, answers to that question seeded Engineering for Change.

“We have existed 130 years as an organization, so that we could be here now to respond to this challenge,” Tom Loughlin, Executive Director of ASME at the time, said.

E4C launched in 2010 with the promise of gathering the world’s engineers together with global development practitioners across the sectoral spectrum. From inception, our goal was inclusion. We offered a service that was agnostic to sectors and expertise so that anyone trying to solve a problem in global development might learn more about technology that can assist. Our membership swelled with professionals, students and volunteers. They represent multi-nationals, start-ups, governments, non-profits and the nascent crop of academic programs dedicated to engineering for global development. At the same time, we developed resources that spanned the many fields of global development, from research to design to policy.

“We have existed 130 years as an organization, so that we could be here now to respond to this challenge.” – Tom Loughlin, former Executive Director of ASME

The commitment to inclusion is in our DNA. While E4C was conceived in discussions within ASME, it launched as a non-profit with three founding partners: ASME, the Institute for Electrical and Electronics Engineers and Engineers Without Borders—USA. Eight years after launch, we consolidated under ASME’s department of Engineering for Global Development, while keeping the promise to serve the global array of institutions and sectors. 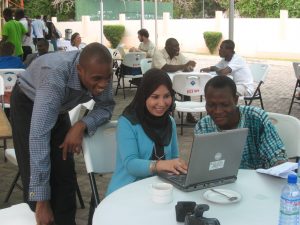 Throughout 2010, E4C held a year of announcements and “soft launches,” in the corporate parlance favored in our hometown of New York. Our organization began as a labor of passion for a team of engineers small enough to count on one hand. The website was the hub, orbited by a constellation of in-person networking events and speaking engagements.

Our premise was threefold. First, we sought to connect volunteer engineers with the organizations and people who could use their skills to improve lives in underserved communities. We knew that engineers were clamoring for opportunities, but they didn’t know where to find them.

Second, we believed we could suppress the onslaught of technological disasters we saw in global development. About one-third of water pumps are broken at any given time in Sub-Saharan Africa, often because there is no plan for maintenance. Stories abound of hospital closets full of donated medical equipment gathering dust because nobody knows how to use them, or there is no supply chain for toner, or they require too much electricity. The world makes colossal mistakes in the design of technology for global development, and the people least able to afford it are left to suffer the consequences. Products that gleamed on paper have seduced donors and hauled in eye-popping sums, then collapsed under real-world conditions. The Play Pump was the most infamously expensive blunder discussed in the year that E4C launched. Engineers had stories of products that never should have progressed beyond a first field test. E4C’s founders realized that resources were evaporating in poor planning, poor research and design phases that rarely consulted with the people who were expected to use the final products. Our goal was to advise the engineers, donors and everyone involved in the processes of design, procurement and deployment of technology.

An official debut: E4C made an early public appearance at the Engineering for the Developing World Summit in Washington, DC, 2010

Third, we strove to amplify the good work of innovators whose designs have been ignored. Our founding members saw dozens of well-designed devices disappear into history’s dust bin each year. Marketing is hard for everyone, including engineers and product designers. So good ideas are lost in the heaps of other products competing for attention from donors and consumers. One consequence is the loss of beneficial technology, and the other is a hamster wheel of designers reinventing the same kinds of products, unaware of the work that other groups have done. 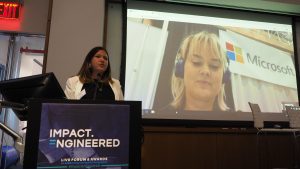 Mariela Machado (left), Program Director at Engineering for Change, holds a virtual conversation with Melissa Sassi of Microsoft during Impact.Engineered in Brooklyn, New York in 2018.

In our decade of service, E4C has not lost sight of our original premises, but we have changed. We first built our website around a space for virtual collaboration on technical design. We still offer that service, but our focus has shifted to develop a well of educational resources. Some are directed at engineers, some at global development practitioners in other sectors who seek insight into technologies that can meet their needs. By responding to the needs our members have expressed, we transformed from an online space for collaboration to an online space for knowledge sharing.

Ten years after launching, one hand can still count our staff, but our reach is broader than most of us would have imagined. We have more than 40,000 members and an online community of more than 1 million fans and followers. Our roster of multidisciplinary experts has swelled to nearly 1,000 contributors from around the globe. We are lucky to have the problem of attracting a deluge of applications to our Research Fellowship program each year, requiring our small team to pore through hundreds of submissions by talented students and early career professionals from around the world. Our Fellows have delivered actionable research to major companies, UN agencies and small non-profits in need of engineering insights. Guided by our staff, the Fellows have contributed insights to our Solutions Library which has grown to more than 1,000 essential technologies that meet basic needs in underserved communities. We offer an online course in global development engineering. Twice each month we invite the world’s thought leaders in global development technology to present lessons learned and findings from their work as webinars and virtual seminars. Through our News and Contributing Editors programs, we present analysis and opinions from the world’s leading minds in development technology. And over the years we have had the privilege of partnering with dozens of the world’s leading engineering societies, multi-national firms, innovative start-ups, non-governmental organizations, multilateral agencies and others.

With our first decade in the rearview mirror, we’re looking down the 10-year road to 2030. The UN’s 2030 Agenda calls for meeting the Sustainable Development Goals, a 17-point plan for lifting people out of poverty, reducing mortality rates and improving the quality of life worldwide. Where are we now? One billion people lack reliable electricity, 2.3 billion use unimproved toilets, or no toilets at all, and 5 million children under age 5 die each year to illnesses that existing technologies can prevent, to name a few unmet challenges.

The world has made long strides in lifting people from poverty, but work remains. Technology and the engineers that develop it have a pivotal role to play in reaching each of the SDGs. Mounting pressures from climate change, overpopulation, uneven support from governments and, of course, the COVID-19 pandemic all threaten to derail the completion of the SDGs. With those challenges in mind, we’re all at the starting line of a decade of action.

A new bug trap in development applies artificial intelligence to the ages-old problem of pest control on farms. AgroPestAlert, a Spanish startup with roots in Chile and Venezuela, is a network of “smart” traps that capture insects and analyze their wing beats to identify their species and even their sex. Placed throughout the fields, the traps communicate with the system to predict an imminent invasion. When complete, the system will...