Those who have lived or traveled in Tanzania can attest to the poor state of the country’s transport. Underfunded railways stand unused or operate inefficiently. Minor roads and dirt tracks running through most towns and villages are heavily potholed. Highways between major cities are in better condition, but they often span only two lanes and are in a state of disrepair themselves. And heavy seasonal rainfall makes roads impassable in some regions.

The problems are not confined to Tanzania, they extend throughout East Africa and beyond. And the delays this transportation infrastructure causes are more than just a nuisance to drivers, they also take an economic toll.

Approximately 90 percent of exports and imports inside Africa reach port destinations by road. Because of the extensive length and poor condition of roads across the continent, transportation amounts to 30 percent of the total cost for exports and imports in African nations. In comparison, that cost is only 9 percent in developed nations. In Sub-Saharan Africa, only 16 percent of roads are paved. Appropriately, the Program for Infrastructure Development (PIDA) under the African Union’s New Partnership for Africa’s Development (NEPAD) prioritizes “regional and continental infrastructure” in its 30-year strategy.

In unison with NEPAD’s vision, a new railway is planned that will add 1672km (1040 miles) of track to East Africa, extending from the port of Dar es Salaam into the eastern hinterlands of Tanzania. Covering Dar es Salaam-Isaka-Kigali and Keza-Musongati, the railway project is known as DIKKM Rail for short. It runs parallel to the existing central line in Tanzania before stretching into the landlocked countries of Burundi and Rwanda.

The objectives of the project are to provide modern and efficient rail service to the East African Central Corridor, improve the transport connections of landlocked countries, reduce the overall cost of transport, reduce the load on regional road networks, and to assist in unlocking extensive mining resources. 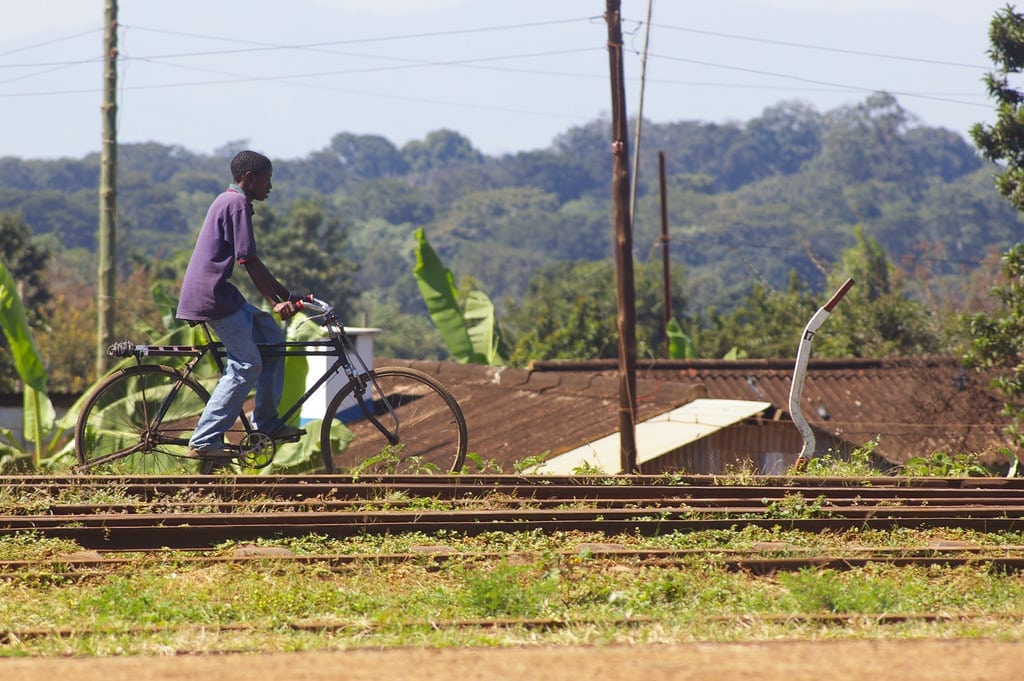 The investment is sorely needed. Railways in SSA have been slow to respond to the liberalization of economies in the region, and very few governments have invested significant sums in rehabilitating and renewing infrastructure. The Africa Infrastructure Country Diagnostic has indicated that in the next 10 years SSA will need $93 billion per annum to finance its infrastructure. However, less than 50 percent of this funding is available currently. The African Development Bank has stated this year that this lack of investment reduces productivity by 40 percent and slowing GDP growth by 2 percent each year.

The benefits of an updated rail system

Its direct effect is through investment. Initial capital investments in DIKKM Rail are estimated between USD $5-6 billion, and it is estimated that the new railway will employ approximately 2000 staff. Spending on materials spurs the development of suppliers, and spending on labor provides jobs. People with jobs purchase more, resulting in gross domestic product growth (depending on the marginal propensity to consume).

Its indirect effect on economic output is through productivity. A rail can raise productivity by reducing transaction and other costs. It allows a more efficient use of conventional productive inputs. Provision will be made on DIKKM Rail for passenger services, estimated at 1 million passengers annually, with fares between Dar and Kigali estimated to compete with bus fares at a break-even price of $.018/km vs $.022/km for buses respectively. By 2029, traffic levels are expected to be, at minimum, 8.5 million tons per year and up to 25 million tons per year in the best-case scenario, implying the improvements in transaction cost and time made possible by the railway.

Africa’s railways from past to present

In the 1830s, Great Britain saw itself become the world leader in railway development. George Stephenson built the first public inter-city railway line in the world that relied exclusively on steam-powered locomotives, and the Railway Boom in Great Britain shortly followed: extending the initial 56km (35 miles) of track to 8000km (5000 miles) in only 25 years. 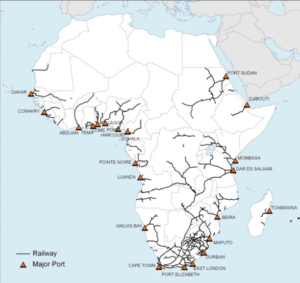 Around the same time, the British Empire—primarily comprised of occupied territories with sea access—was a global hegemony, ruling nearly a quarter of the world at its peak by 1913. The Empire was ultimately an extractive force: its rule over other countries allowed it to funnel resources and wealth from occupied regions to Great Britain. The ability of railways to speed up extraction saw their quick spread in British colonies, often following linear routes from resource-laden hinterlands to ports that grew into Africa’s major cities. (This can be seen on the map to the left of colonial railroads in Africa, with South Africa as an exception.)

The African rail network today hasn’t altered much from its state towards the end of the colonial era. The 30-or-so countries with railways have sparse networks rarely connected across countries–except for the southern African network where lines extend from South Africa (where the network is far denser) up as far as the Democratic Republic of Congo. For sub-Saharan Africa as a whole, very few new tracks have been laid in the past few decades.

Investment patterns in African infrastructure are changing. China has backed railways across Africa: in Djibouti, Ethiopia, and Tanzania. The estimated cost for new inter-city railways between 2004 and 2014 backed by the Chinese in Africa is $9.9 billion. Of that, 82.5 percent of the total cost has been borrowed by African governments from China’s Eximbank between 2000 and 2014 according to SAIS estimates.

China is suffering from an economic slowdown, causing excess industrial production and overcapacity in industries that includes steel production and rail infrastructure. African governments borrow from Chinese banks because their needs are dire, while the banks lend to them because Chinese companies win the contracts.

DIKKM Rail has the potential to affect many countries once it is completed. The landlocked states of Rwanda and Burundi will be more open to international trade; transport costs for exports, imports, and commutes across the board will decrease, and expediency will go up. Perhaps most importantly for the region, however, the budding relationship between Chinese investment and African infrastructure indicates a step away from the legacy of imperialism toward a newer and more mutually beneficial partnership for African development.

Samuel Egbu used to pay 50 naira (US $0.32) to charge his phone battery in Umuagwu, a village in Rivers State, Nigeria. Or sometimes he would wait with his dead phone in the small crowds gathered around a neighbor’s portable generator. Electricity was scarce until solar power changed the community. “Life used to be very difficult and uncomfortable in the village because there was no light. As soon as it...