Smog settles on the shoreline of Chongqing, China. Photo by Onny Carr / Flickr 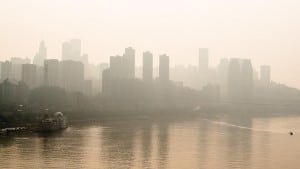 Smog settles on the shoreline of Chongqing, China. Photo by Onny Carr / Flickr

China’s rapid growth, a 30-fold increase in GDP since the late 1970s, has come with the severe side effect of air pollution. Although a movement to draw attention to poisonous air quality has been growing almost as fast as the country’s cityscapes, solutions have been uninventive and surprisingly slow.

When I arrived at Peking University to study air quality in 2013, Beijing had reversed its stance on reporting air pollution. The central government had launched its own monitoring system, and in September of that year published an “Air Pollution Action Plan” that not only limited the use of coal to 65 percent of the country’s energy mix, but encouraged the installation of much-needed air-treatment equipment in industrial plants.

I wondered why air filters aren’t a household item. The answer is simple: Even the cheapest air purifiers cost over a month’s rent.

With government recognition of environmental problems, individuals and NGOs have increased their advocacy. Earlier this year, journalist Chai Jing gave a talk entitled “Under the Dome,” which received over 150 million views within three days of its release online. While the talk has since been taken offline by the Chinese government, its impact has been compared to Al Gore’s “An Inconvenient Truth” and Rachel Carson’s Silent Spring. For the first time, all aspects of China’s air pollution—from health effects to industrial noncompliance—were presented in a single comprehensive and accessible presentation.

Have these kinds of government and citizen initiatives made a difference? Beijing’s air quality data from the first half of 2015 indicates that the concentration of particulate matter up to 2.5 micrometers in diameter (PM2.5, a measure of air pollution) has decreased to 80 percent of the average in early 2014. And the number of days considered “heavily polluted” has dropped by 50 percent since December 2014. There is evidence, however, that although Beijing’s pollution has lifted slightly, damage from the dirtiest industries is moving to western and southern China. Provinces in those regions such as Henan, Hubei, Hunan and Sichuan are now considered the most polluted of the country. Even for provinces whose data indicate improved air quality, there are legitimate concerns that local governments are fabricating data in order to meet standards.

Given China’s air pollution problems, I wondered why air filters aren’t a household item. The answer is simple: even the cheapest air purifiers cost over a month’s rent.

The Beijing residents whom I met were surprisingly inactive in protecting themselves. My lab mates and professors at Peking University, among the leading experts in China’s air quality, never wore the Darth Vader-like masks that keep out 99 percent of PM2.5. (I wore the mask religiously.) Even when PM2.5 concentrations skyrocketed above the accurate detection limit, which is one level above “hazardous,” lab workers kept windows open to the toxic air. I often asked my colleagues why all this nonchalance about the very chemicals they study every day. Their answer was usually some version of Why bother?

Entrepreneurs take note: A large market exists for a quiet, affordable and attractive filter that targets all components in air pollution.

In the absence of successful governmental intervention, Chinese citizens are literally living in a cloud of pollution. But there is no reason we cannot create short-term solutions. Scientists should be funded to design affordable air filters and user-friendly masks. There are opportunities for students as well: courses and grants focusing on international development and product design are flourishing in universities across the country. For example, at the Blum Center for Developing Economies at the University of California, Berkeley, where I attend, courses like Design for Sustainable Communities and competitions like Big Ideas @ Berkeley are pushing students to develop usable and affordable air pollution protection measures.

Advances have already been made toward a more affordable air filter. The Smart Air filters developed by Thomas Talhelm, a former Fulbright researcher in Beijing, cost only $33 but they provide the same level of protection from PM2.5 as high-end filters. The design, which consists of a high-efficiency particulate arrestance (HEPA) filter strapped to a fan, is a great way to improve indoor air at an affordable price. Yet these filters are not perfect. They target only PM2.5, while allowing harmful volatile organic compounds (VOCs) such as formaldehyde and benzenes to pass by. In addition, aesthetic qualities such as low noise during operation, a light indicator to signal when air pollution has reached a safe threshold and an attractive outer shell are missing from these early designs.

To date, there are no affordable alternatives to high-end filters that can eliminate not only particulates, but also trickier gaseous compounds. While PM2.5 is generally considered the greatest air quality health risk to the Chinese population, VOCs emitted from sources such as plywood, fabrics, insulation, personal care products and tobacco smoke are also significant indoor air pollutants. A large market exists for a quiet, affordable and attractive filter that targets all components in air pollution. That means that the time is now for scientists and students to design a smart and affordable air filter to address the needs of millions of Chinese consumers.

Ming Zhang is a graduate student in Civil and Environmental Engineering at the University of California, Berkeley. She studied air pollution at Peking University on a Fulbright grant in 2013-2014.

Steam cleaning: Nanoparticles and sunlight heat up the sanitation field

In the end of the 1994 bomb-on-a-bus blockbuster Speed, Keanu Reeves has an idea for fixing his problem with a runaway subway train: Speed it up. In fact, that was his solution for most of the problems in the film, which shouldn’t be a spoiler given its title. As a one-trick pony, Reeves’ character had something in common with a class of nanoparticles that can convert light into heat. These...