Rooted in Research, Handwashing Stations Designed to Encourage Kids to Wash Their Hands

The shape and location of a handwashing station may affect how children wash their hands. Mirrors might matter. As may soap dishes. It could seem unlikely that such nuances can make a difference, but the Seattle, Washington- (USA) based nonprofit organization Splash is testing ways that design encourages handwashing among children in emerging economies.

“One of the key things you’ll notice first off is the shape,” says Nick Ellington, WASH (WAter, Sanitation and Hygiene) Infrastructure Manager at Splash. “It doesn’t really look like a normal sink. From the top down it’s more triangular. We did that to encourage kids not to stare at a wall while washing their hands, but, instead, to interact and see each other.” 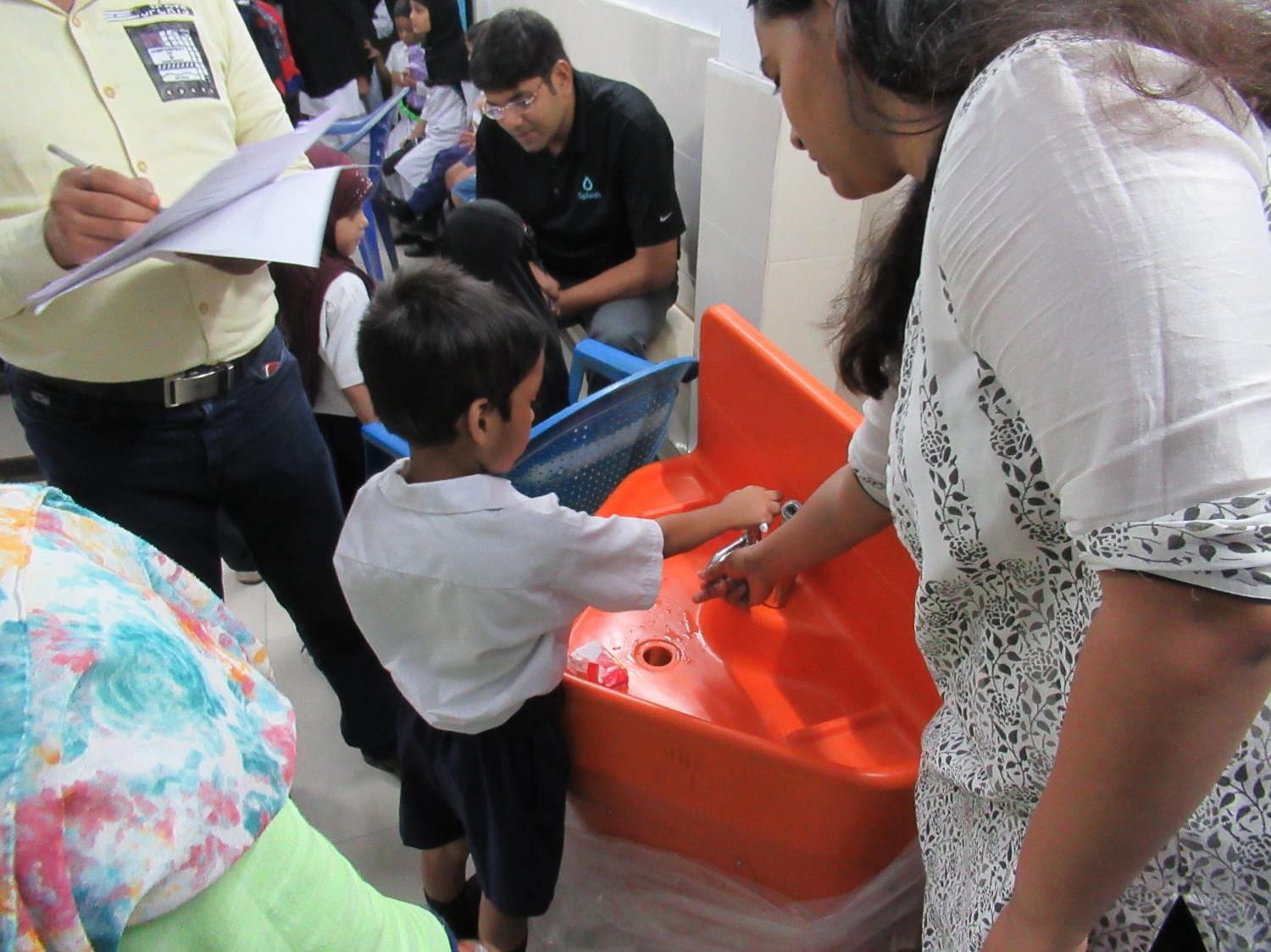 The rationale came from a UNICEF recommendation to make a group activity out of handwashing in schools. In groups, kids may spend more time washing hands at the sink. (For more, please see the UNICEF/GIZ catalog of group handwashing facilities around the world, linked from Fit for School International.) Splash’s stations also include built-in soap trays, which may be a simple trigger for behavior change, Mr. Ellington says. An empty tray can serve as a visual cue that something is wrong and that soap needs to be replaced.

Placing mirrors behind the stations may also promote better handwashing. In a small study in schools in Kathmandu (Nepal), Splash found that mirrors may double the rate of handwashing. Other research unrelated to Splash’s programs appear to confirm the findings. The Calgary, Alberta- (Canada) based Centre for Affordable Water and Sanitation Technology (CAWST) conducted research in Iraq and the Democratic Republic of Congo suggesting that “nudges” such as mirrors and soap do increase the numbers of people who wash their hands in restrooms. 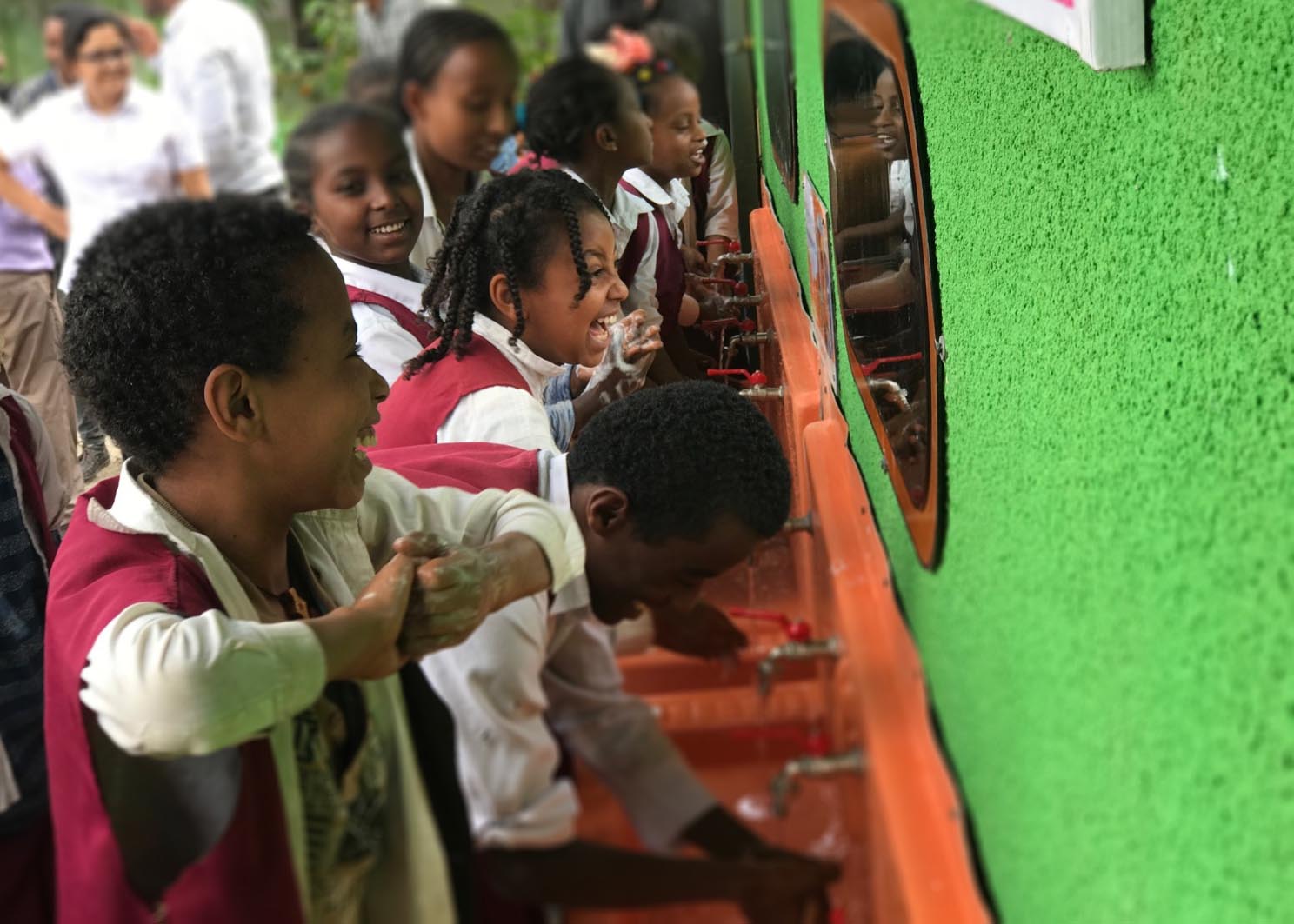 As an easy first line of defense against the spread of infectious disease, handwashing may be even more important in developing countries and regions, as they are prone to epidemics of waterborne illness. A review of studies of water, sanitation and hygiene interventions in developing countries found that handwashing with soap controls pandemic flu and plays a key protective role during epidemics of cholera and dysentery in urban slums and refugee camps.

The story of a wash station

Splash’s triangular plastic handwashing and drinking stations represent the latest step in a 10-year journey that began with a misstep. The organization’ first stations broke. Recognizing the mistake, Splash set out to build a better station. That effort yielded stations that work and an evolving design. It culminates in newly cast aluminum molds, a final step before the mass manufacture of the newest generation of stations. But each step along the path they took to get to this place is interesting to see in the images below. It all started when someone at Splash realized that wash stations for school children are in terrible shape.

Poorly placed
Taps were never installed
Unused because they are too high for little handwashers to reach.

Splash’s teams in India and Ethiopia noticed a trend among handwashing stations at schools: poor designs, poor placement with some too high or otherwise inaccessible to kids, and many were broken. Broken tile, broken drains, broken taps, or taps that were never installed: there was a prevailing state of disrepair. The problem motivated Splash to action, and the team set out to equip every public school in Kolkata, West Bengal (India) and Addis Ababa (Ethiopia) with handwashing stations that worked.

In the beginning, Splash built concrete handwashing stations in the style that was considered the gold standard. Each was painted in a kid-pleasing color, each had working taps and seemed to address all the problems that plagued existing stations. But the cost was high and construction took too long to meet the goal of equipping every school. Then the concrete began to crumble. In less than a year the new stations were falling apart. 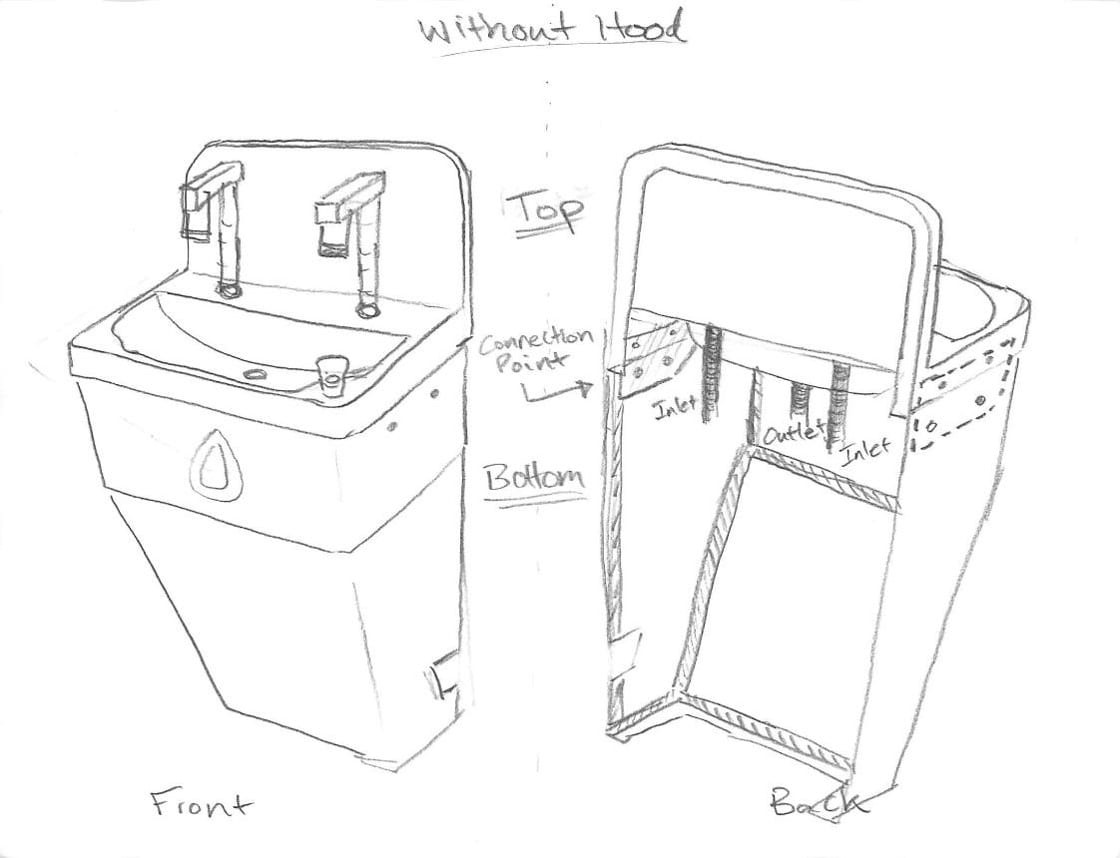 So, the team designed their own. They created fiberglass handwashing and drinking stations that local work crews could build and install. 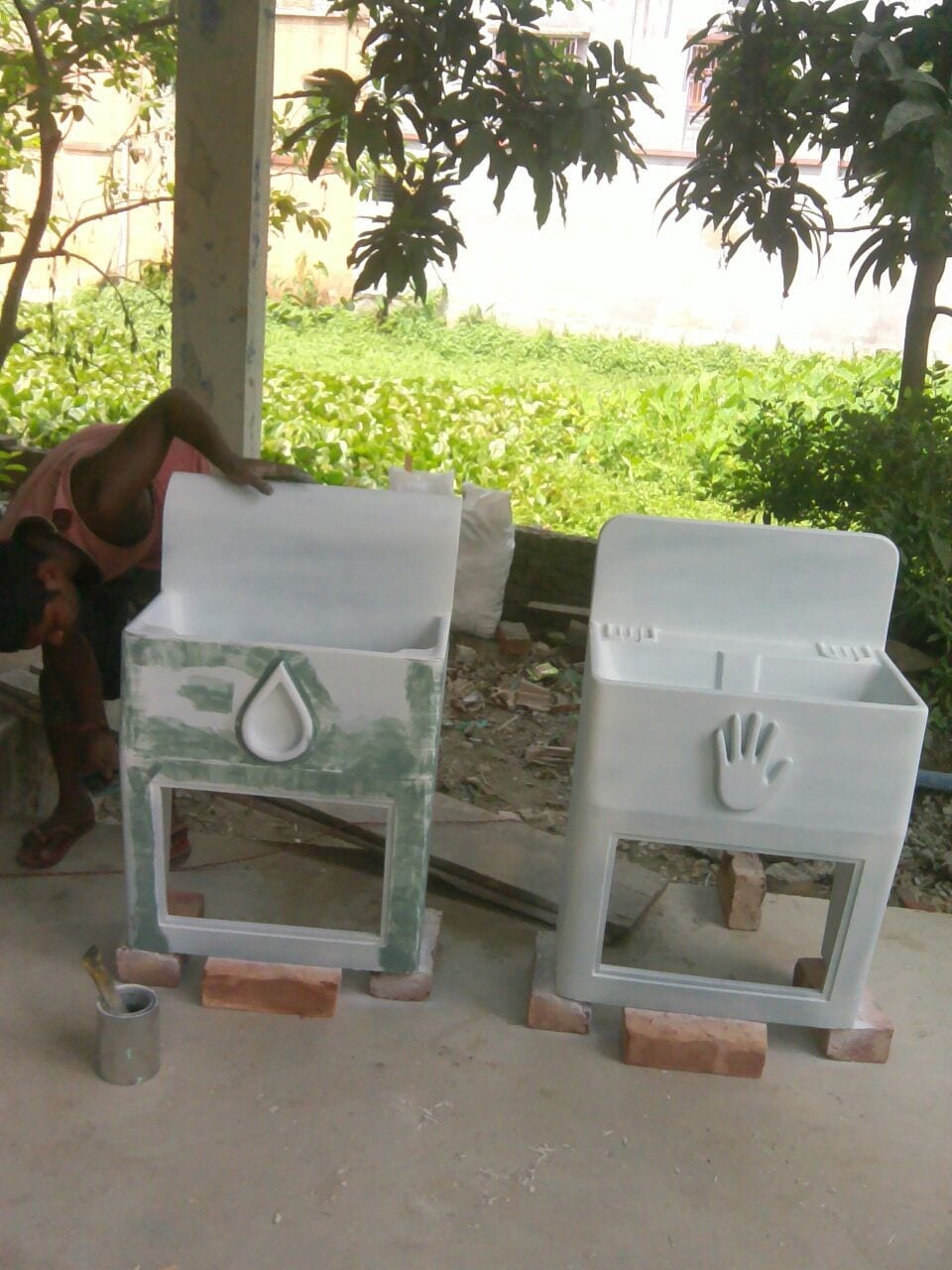 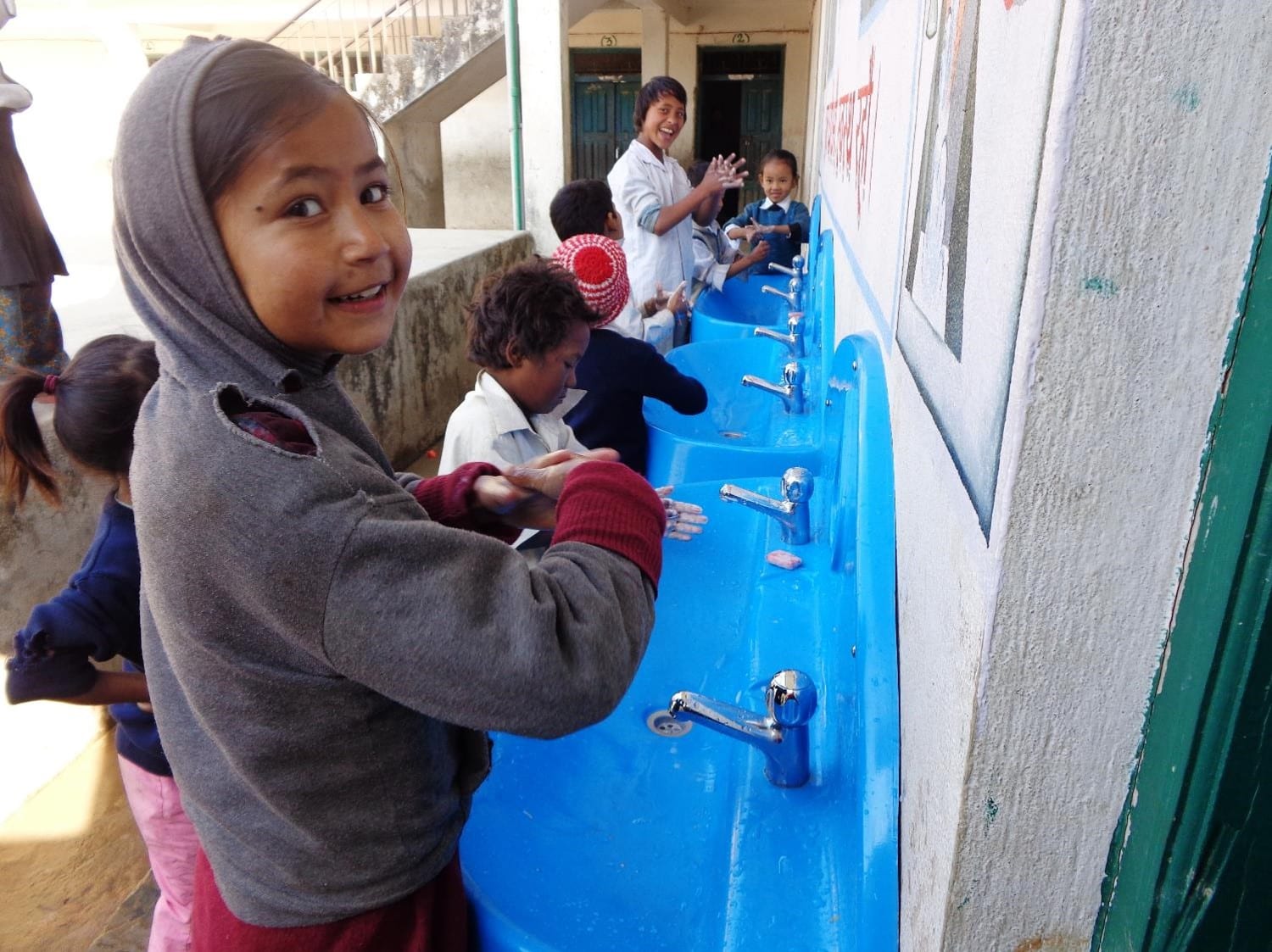 The basins were shallow to discourage the filling of water bottles, dishwashing and other activities that displace little handwashers. And the fiberglass held up to the tests of time better than concrete. 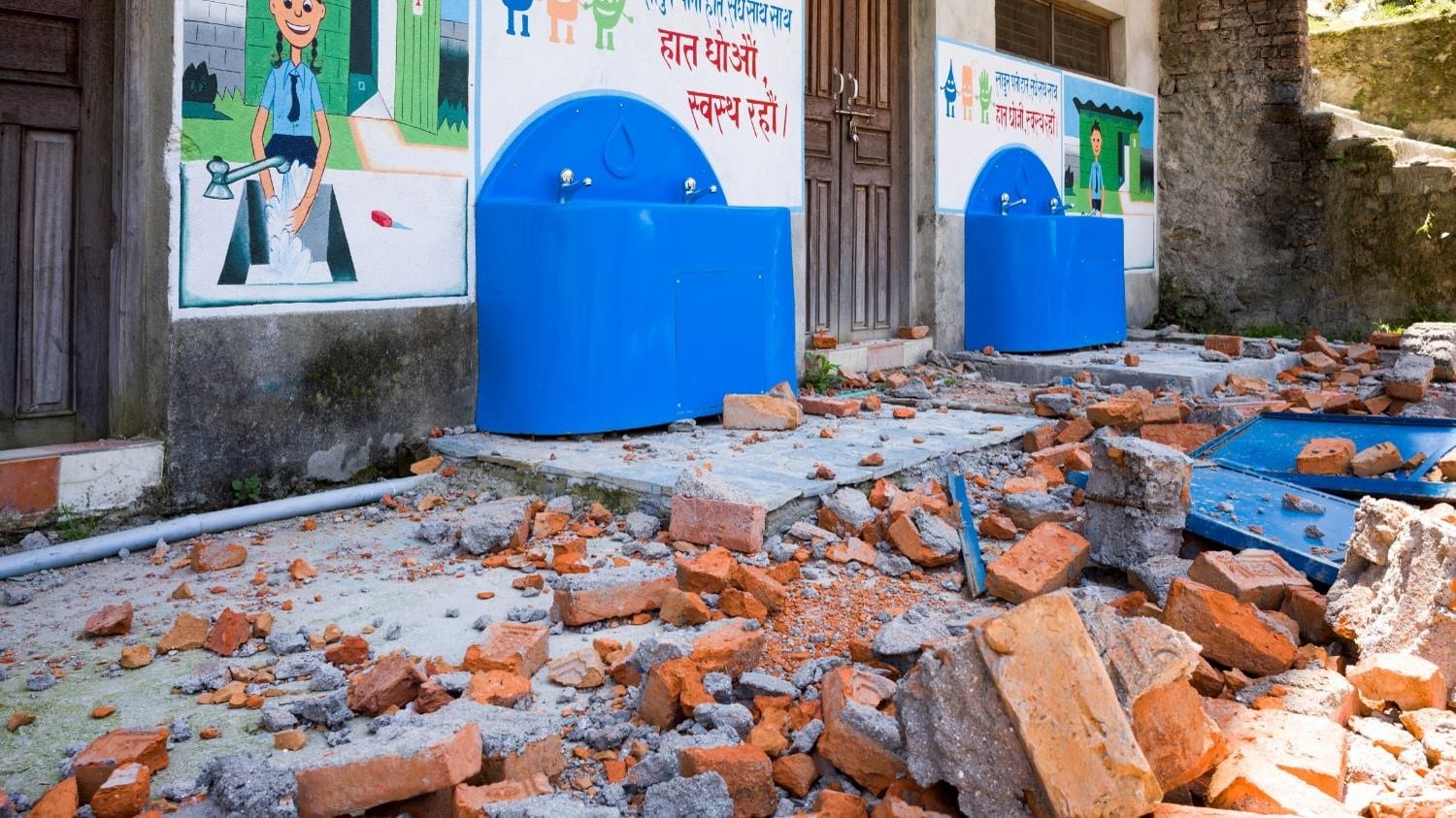 The earthquake that ravaged Kathmandu in 2015 posed an unexpected stress test. All of Splash’s stations survived, many surrounded by the rubble of buildings that had collapsed around them. Rather than starting over and building new stations, Splash’s stations were collected and carried to schools that were standing and deemed safe for children. Those that remained in place served as community access points for clean drinking water.

“There’s really nothing else like the fiberglass stations in the places where we work,” says Mr. Ellington. “Other organizations have seen them and want to buy them for their own work in those places and other cities. That was the driver for our goal to develop a station that could be mass-produced.” 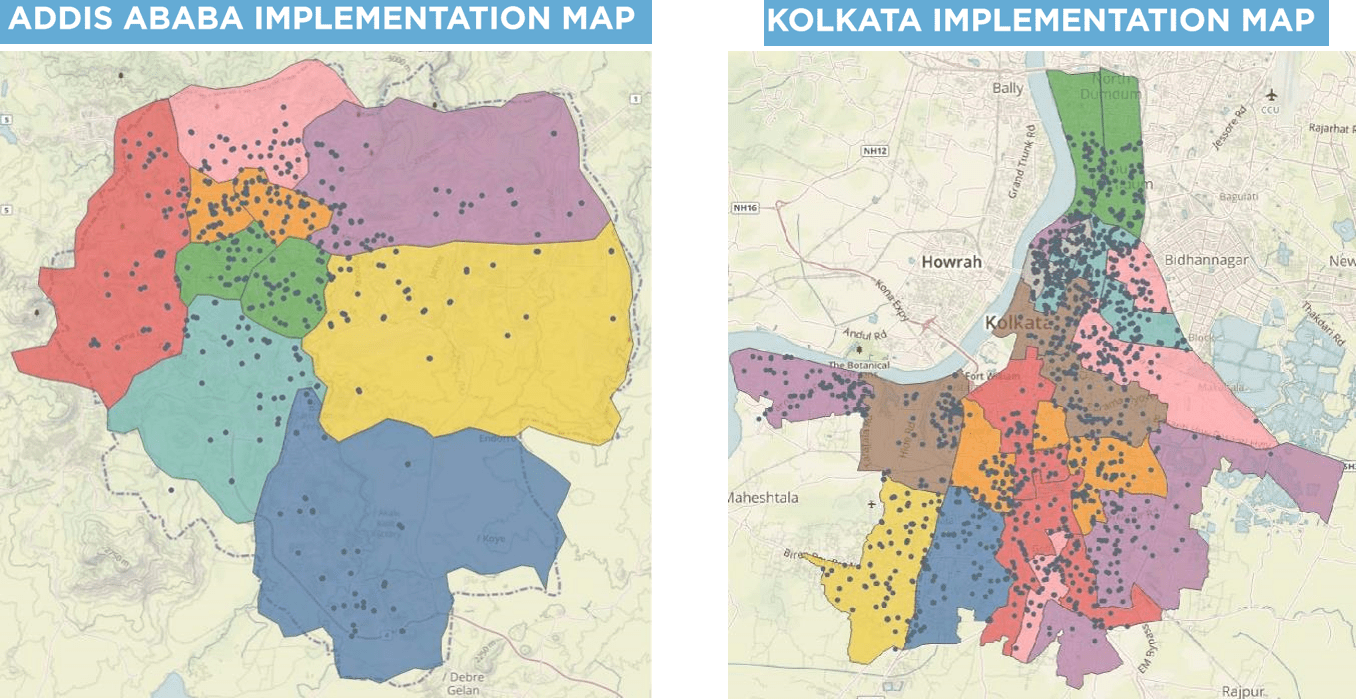 Local workers could build fiberglass stations at a rate of five each week. They needed to build about 12,000 stations to meet their goal of equipping every school in Addis Ababa and Kolkata. The dots in the maps above represent the regions they were targeting. Splash needed to pick up the pace. The team sought partners to help. 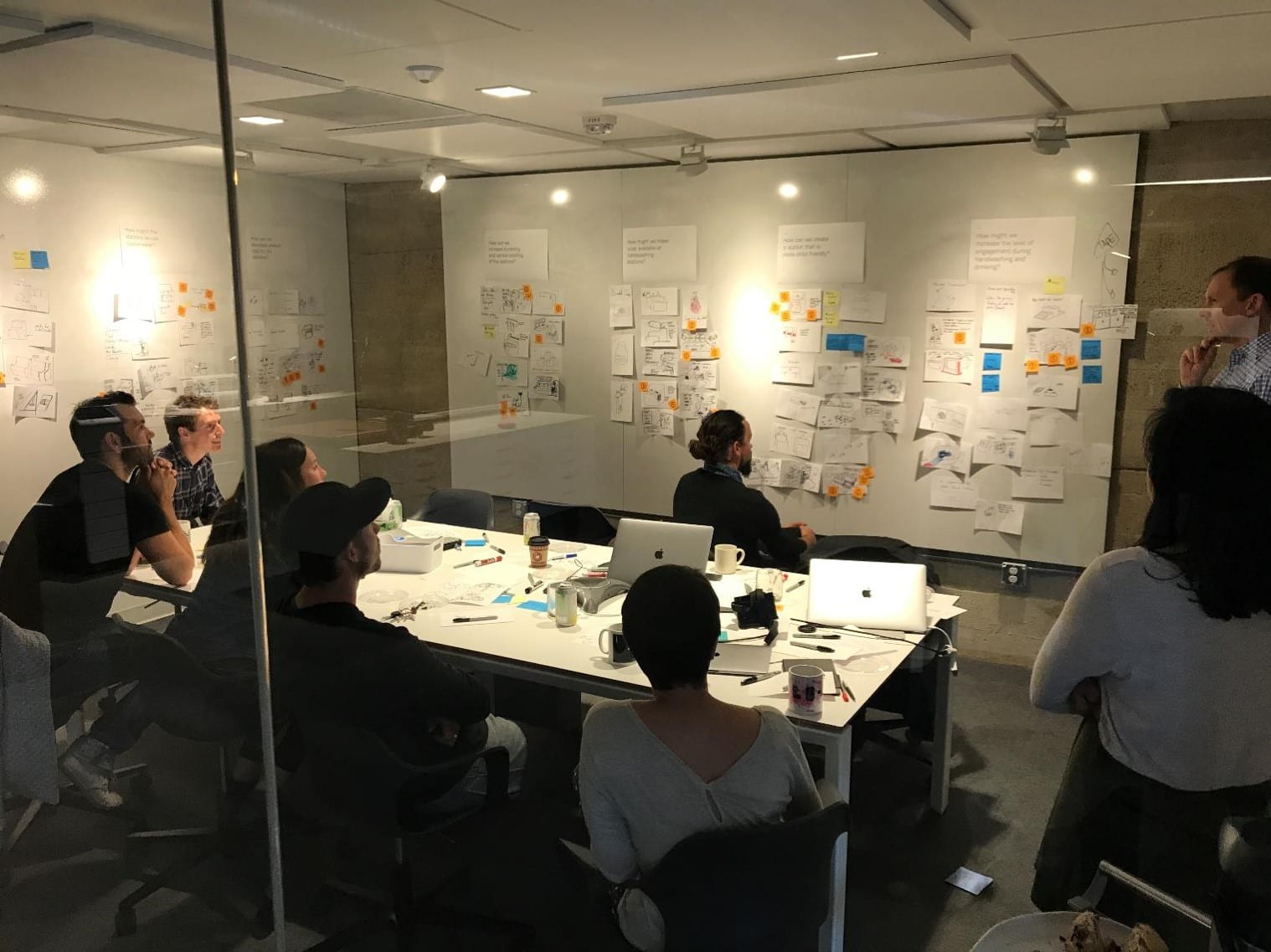 Splash began working with Artefact, a Seattle-based design consultancy, to develop a new design concept of the stations using human-centered design. At the start of the design process, Artefact and Splash convened a group of experts in behavior change to brainstorm. Artefact then worked with Splash to develop station designs using the top ideas generated from the workshop. 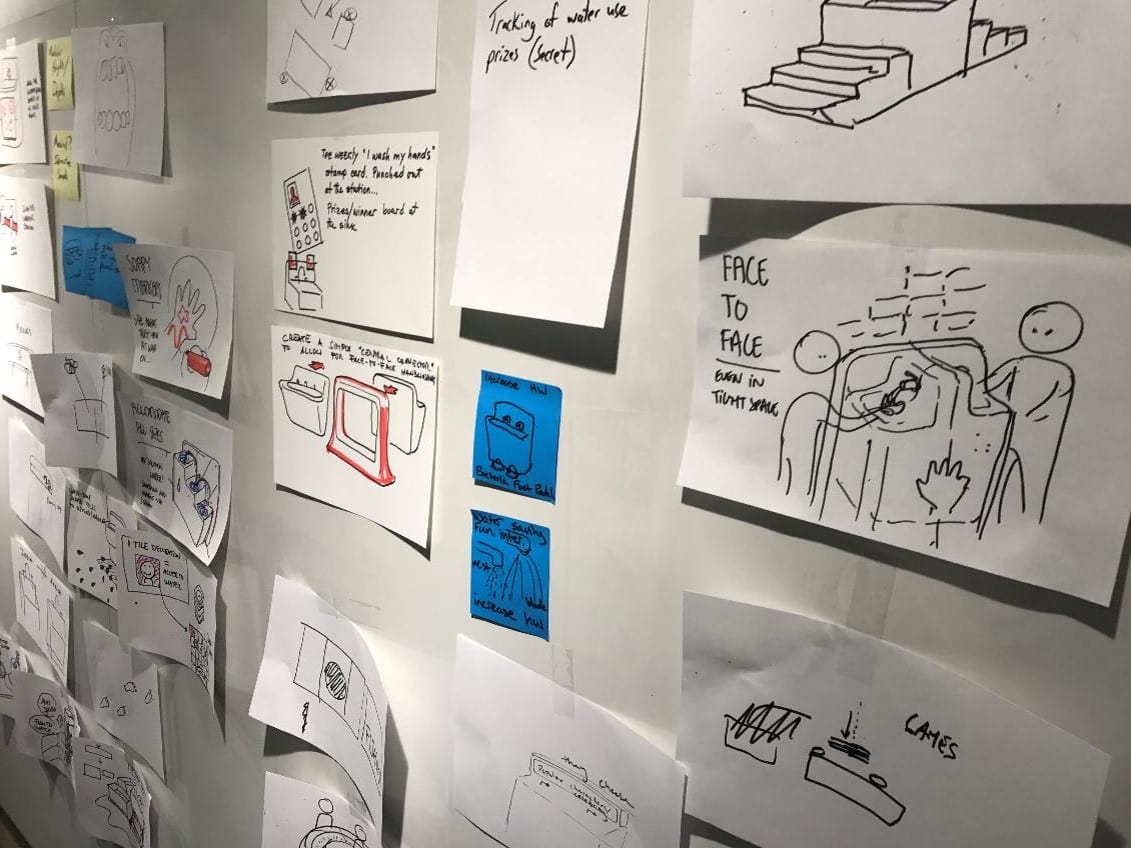 Then the Autodesk Foundation responded, first with financial assistance, then with expertise and software. The partnership with Autodesk centered on converting the design concept into something that could be mass produced. The foundation supplied Splash with access to manufacturing and design experts who helped adapt Artefact’s designs for the rotational molding manufacturing process. Autodesk also introduced Splash to partners in the private sector and plastics manufacturers in India. 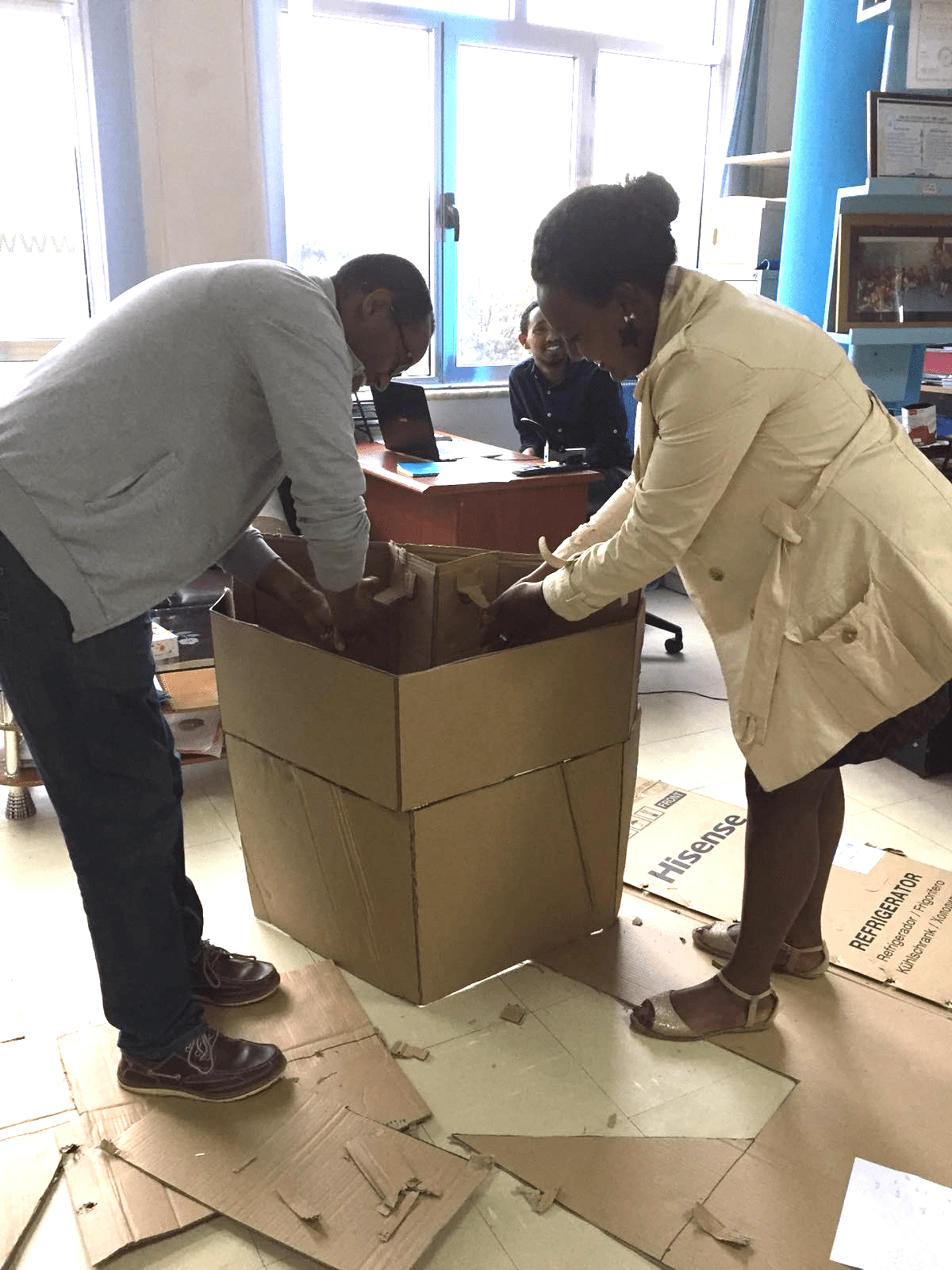 Splash mocked up their prototypes in cardboard and fiberglass and tested among the people who would use the stations. They settled on a triangular design made from plastic, rather than fiberglass, which makes mass production possible.

Now the new stations are close to the finish line. Aluminum molds needed for their manufacture are newly completed and the manufacturer has successfully produced a first set. This set will serve as a test. Splash plans to install these first plastic stations in public schools in Kolkata by April 2019, Mr. Ellington says. At the same time, tests of the taps are underway.

The video shows a snippet of a fatigue test on taps. Taps are an important part of the wash station that can fail if they aren’t durable.

“Poor quality taps are one of the most common causes for kids in schools to lose access to water. During this testing we have proven that we can purchase much more durable taps for about the same price as the poor quality ones,” Mr. Ellington says.

When the testing is complete and manufacture begins, the finished product should look a lot like the stations below. The plan is to build the stations and the risers beneath them from a blend of new and recycled plastic. “We will land on the exact percentage sometime in the next few months,” Mr. Ellington says. 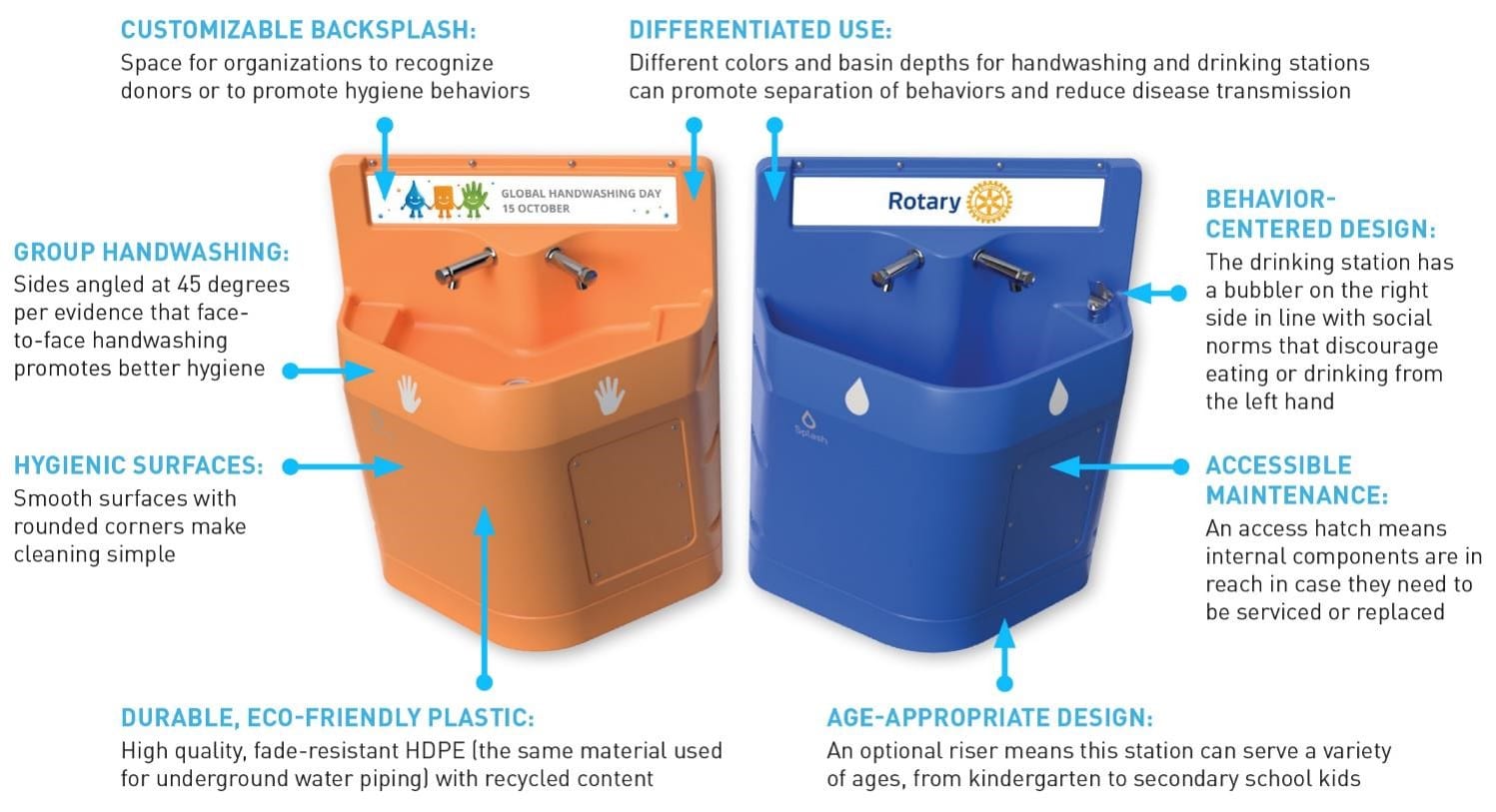 Splash plans to reach the goal of outfitting every government school in Addis Ababa and Kolkata with its handwashing stations within five years, by 2024.  Over the course of the project, the team expects to gain user feedback and design insights that will improve later versions of the stations. While the current stations are appropriate for child-serving, institutional settings, Splash plans to explore different models for healthcare facilities, disaster relief, and rural environments.

In 2018, Splash established a separate social enterprise to sell their new handwashing and drinking stations. Having this entity in place means that Splash will be able to extend sales to third parties, creating a new revenue stream for Splash’s nonprofit work and allowing the benefits from Splash’s stations to reach the larger WASH sector.

For more on Splash please see splash.org. And contact Splash at stations@splash.org for information on station sales.

Bacteria-breeding coconuts may control mosquitoes that transmit zika and malaria

Salitral is a fine place for mosquitoes to breed. Species that spread malaria thrive in its ponds, agricultural canals, year-round temperate weather and periodic monsoon-type rains. But for 12 days in 1995, eight ponds in Salitral were nearly free of mosquito larva. Their populations were decimated by a high concentration of Bacillus thuringiensis israelensis, or Bti. And the delivery system was coconuts. The microbiologist Dr. Palmira Ventosilla developed the homegrown method...