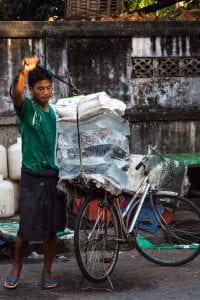 Draft animals and wood fires count among the power sources for new, extremely low-cost technology proposed in a worldwide design contest for off-grid refrigeration. In September of 2019, the non-profit organization Engineers Without Borders USA (EWB-USA) issued the Chill Challenge, soliciting proposals to develop proof-of-concept prototypes for refrigerators and ice makers. The call received 43 proposals from 36 teams representing universities, companies, NGOs, and individuals across the globe. Seven were selected for grants totaling $300,000 for research and development.

“Affordable refrigeration in off-grid communities will be more than a cool drink. It will, in a small way, change the world because of wider benefits such as improved nutrition and education,” said Larry Bentley, who along with F. Andrew Dowdy, is spearheading the challenge on behalf of EWB-USA, with support from an Open Philanthropy grant.

Through their work in off-grid communities, Mr. Dowdy and Mr. Bentley realized that refrigeration was a difficult challenge. Access to refrigeration is key to a number of the UN’s Sustainable Development Goals. Refrigeration contributes to health and nutrition, provides economic opportunities for farmers and businesses, and reduces the burden on women. However, it remains scarce in many economically developing regions. There may be as many 2 billion people on the planet without access.

Part of the problem may be that traditional refrigerators are power hogs. In the global West, the appliances count among the top five energy consumers in the home. In underserved communities, electricity from a central grid can be spotty, and home systems can typically handle only small loads. Solar home systems are increasingly common, providing light and TV and charging phones. Refrigeration, however, is a much more energy-intensive process, and has proved to be a bigger hurdle.

There have been several initiatives to develop efficient off-grid refrigerators, including the Global LEAP Awards by the Efficiency for Access Coalition. The Chill Challenge is intended to complement those efforts, with a slightly different approach to the problem.

Second, is the inclusion of community sources of refrigeration. Rather than smaller household refrigerators, the challenge has solicited proposals for either a larger (150-250 liter) fridge or a community-sized (100-1000 kg/day) icemaker. The fridge is sized to be suitable for small commercial applications, such as shops or bars, which tend to be the earliest adopters of refrigeration. Similarly, the icemaker could provide a very flexible source of refrigeration for households or various income producing activities.

Finally, the initiative is not limited to vapor compression refrigeration. The Chill Challenge is open to all cooling technologies, including thermally driven processes. Design parameters can be found on EWB-USA’s site at Chill Challenge Detailed Design Parameters.

The seven grants, ranging from $30,000-50,000, represent a mix of refrigeration technologies, including vapor compression, thermal sorption and sky radiant cooling. The range of ideas submitted impressed the judging panel. “It was really difficult to select only a handful of proposals for grants,” Mr. Dowdy says.

Technologies Represented In The Challenge

Vapor compression refrigeration, powered by solar PV panels, is the most widespread off-grid refrigeration technology in use today. However, it is difficult to meet the Chill Challenge affordability targets using this technology. The two vapor compression proposals receiving grants are for ice makers, which offer certain economies of scale over refrigerators, and can address “dark day” challenges by storing ice, rather than using battery storage.

Solar refrigeration, using sorption processes, has been investigated for many years, but commercial success has been elusive. A big challenge is that the coefficient of performance (COP) for thermal sorption systems is well below that of vapor compression systems. The low COP’s of thermal systems, combined with the falling cost of solar PV panels has favored vapor compression systems for off-grid applications. However, the costs of evacuated-tube solar collectors have also fallen rapidly. Furthermore, thermal systems may be able to address “dark-day” contingencies by storing hot water, which could prove cheaper than battery storage required for vapor compression. 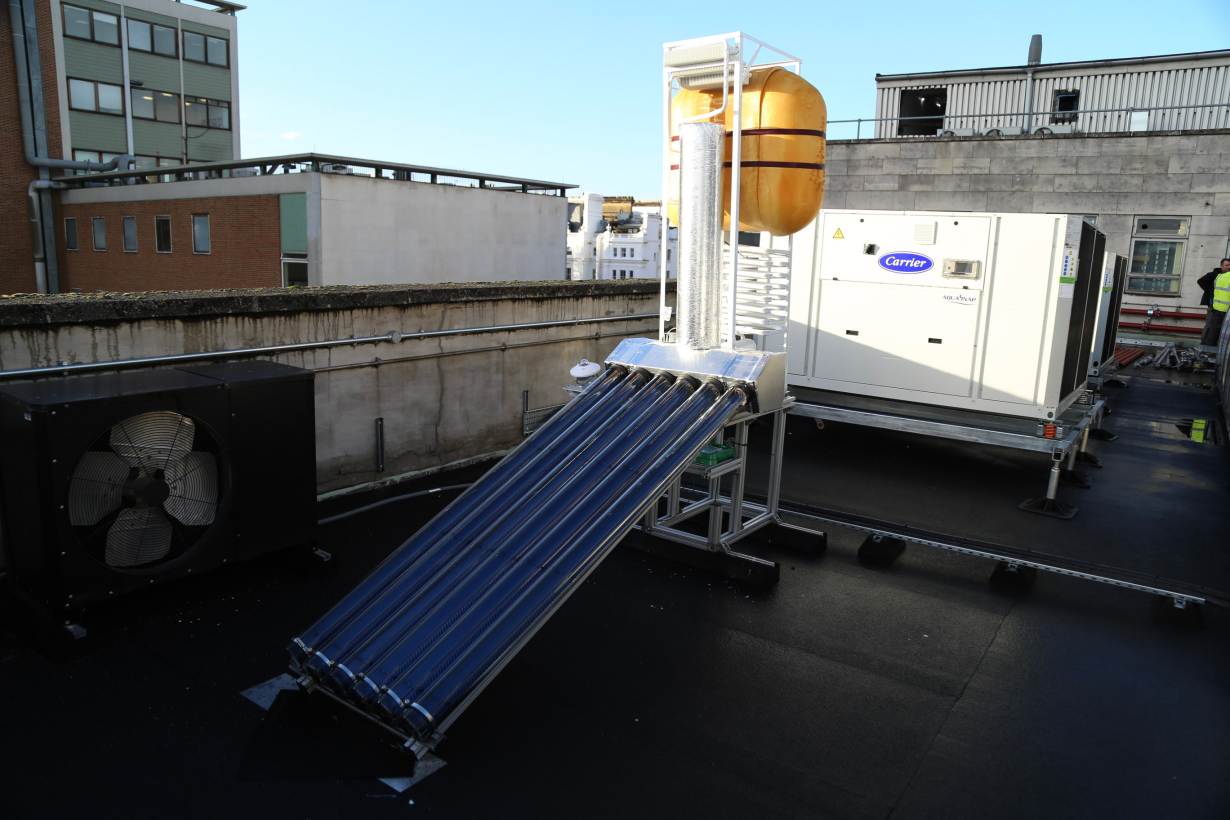 A team from Imperial College London proposes to drive a refrigerator using hot water from solar radiation collectors like these. Photo courtesy of the author

On paper, sorption systems using biomass should be quite affordable. Biomass, in the form of fuel wood or charcoal, is widely available for cooking in off-grid communities, and is an extraordinarily cheap source of thermal energy which should make it affordable even for processes with relatively low COP’s. 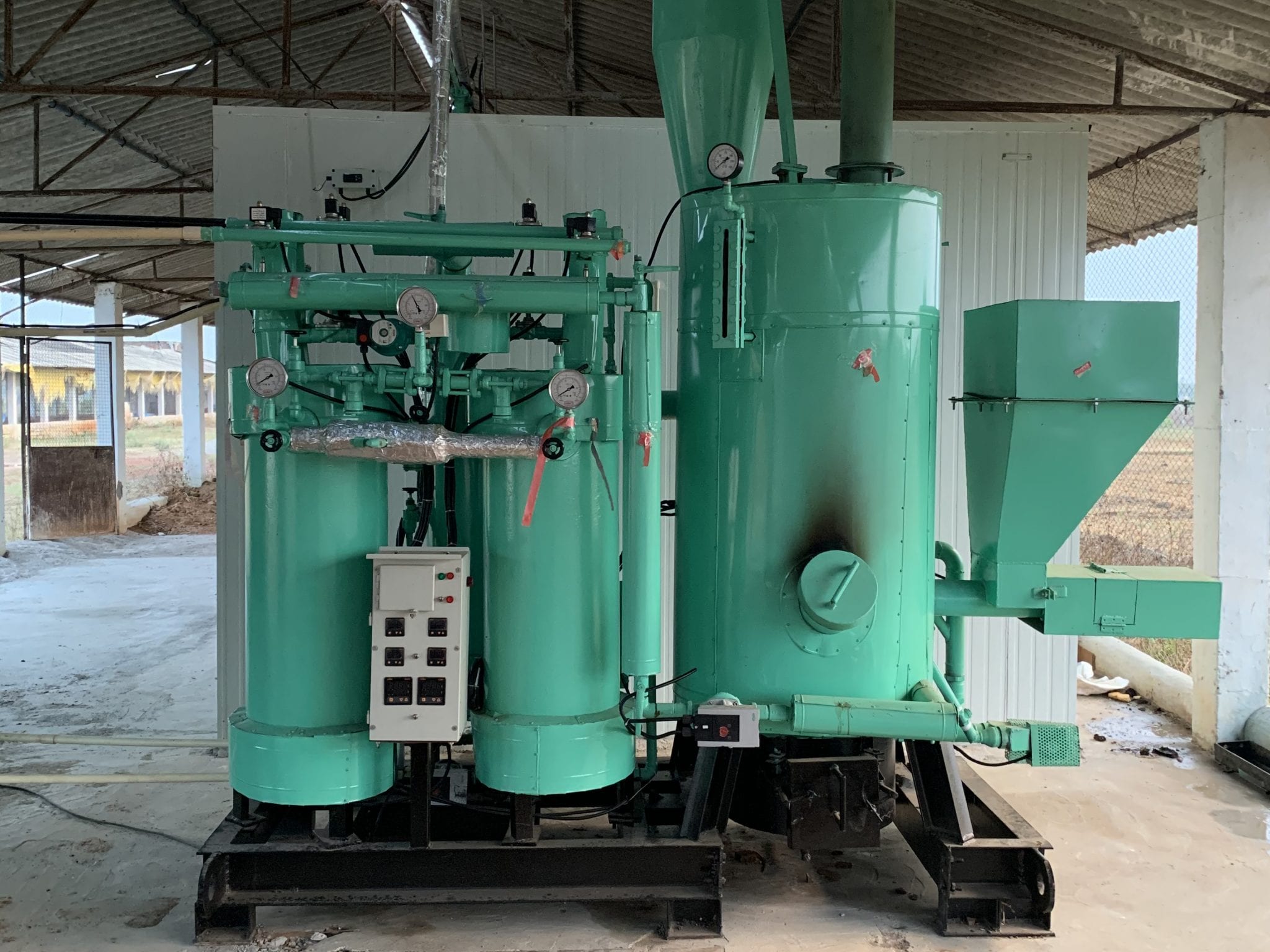 “Night sky radiation” is a well-known phenomenon that was used by ancient Persians to produce ice, and was tested in “roof-pond” houses in the 1970s for residential cooling. In recent years, researchers have developed surfaces that enhance this effect by radiating heat at infrared wavelengths that can pass through the atmospheric window into space. At the same time, the surfaces are highly reflective of sunlight which allows them to maintain temperatures below ambient while exposed to full sun.

Next Steps for the Teams

The grantees develop prototypes and test them for the remainder of the year. EWB-USA expects final research results to be available in the first quarter of 2021.  The event’s leadership views this prototype development phase as the first step in a longer process to bring affordable, off-grid refrigeration solutions to developing countries. If viable technologies are demonstrated, the organization intends to solicit funding to support further development and marketing.

“Successful solutions to our Chill Challenge will be a game-changer for millions of people and we are extremely proud to be catalyzing new ideas and inspiring out of the box thinking on this vital development tool,” says Cathy Leslie, CEO of EWB-USA.

Christine Broda-Bahm is Senior Writer at Engineers Without Borders – USA.

Fascinating, curious people who love to learn gathered at World Maker Faire this year to share what they have made. Some people made an electric giraffe, others made a crocodile ride and there was a tent workshop on lockpicking, but a few talented people built things that can improve people’s lives, especially in developing countries. E4C’s content strategy manager, Iana Aranda, visited the event and captured some of the creativity...