The Buried Diffuser by Chabhani Technologies delivers water to the roots of crops. Image courtesy of Securing Water for Food

Farmers in dry climates manage to coax crops from sandy soil and water them with rain and even fog. We mined our Solutions Library and network of experts for proven tools and even a couple of prototypes that are helping farmers grow food with little water. These are 10 tools that enable farming in dry climates. 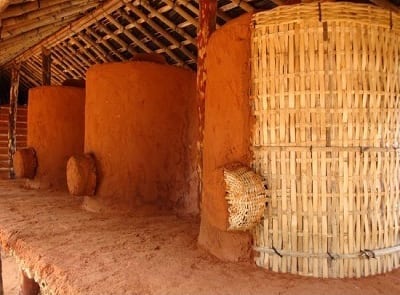 Subsistence farmers in Mozambique have to endure a dry season from October to January that they call the “hunger period.” Families eat less to get through the drought. As the world’s climate changes, the dry season is lengthening. Low incomes and limited or no electricity make refrigerators scarce in these communities. But storing food is more than just a convenience, it can alleviate hunger. The Zero-Emission Fridge for Rural Africa (ZEFRA) can help. Also known as Silo Tehetere, the fridge is a seed storage silo built with local materials, and it doesn’t require power.

The fridge (or silo) is made of woven bamboo encased in clay. It seals seeds in a nearly hermetic chamber which also contains herbal insect repellents, all standing on a base with built-in mouse traps.

Learn more in our Solutions Library.

Greenhouses are essential to productive farming in dry climates, and this one is created for low-income farmers in developing countries. The Humanitarian Engineering and Social Entrepreneurship program at Pennsylvania State University tests and distributes these Affordable Greenhouses in Kenya and Tanzania and the team is branching into drier African climates. The greenhouses can be made from locally available materials, they are tough and they can expand with the needs of the farmers. HESE’s research shows that the greenhouses cut water loss by up to 30 percent and water usage by 50 percent if used in tandem with a drip irrigation system. 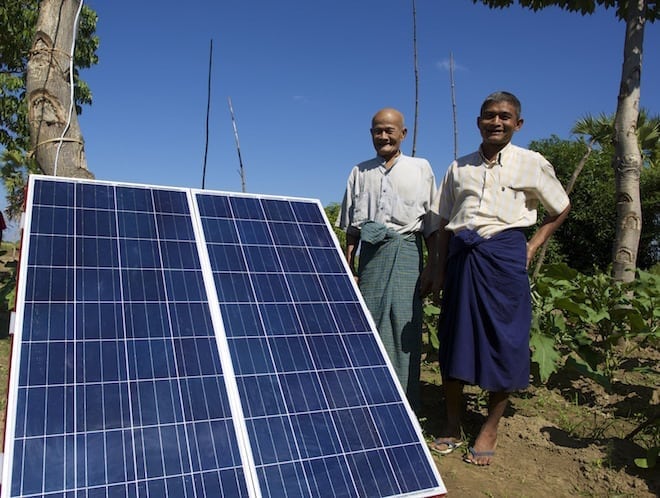 U Myat Kyaing and his son U Nyein Hlaing stand by the solar panel that powers their new Lotus Solar Irrigation System. The farmers in Myanmar were the first customers to buy Proximity Designs’ pump after its launch in October 2015. Proximity calls it “radically affordable” for its retail price of $345, making it one of the most low-cost solar pumps on the market. Powered by 260W of solar panels, the lotus is a submersible pump that fits into the 50mm (2in) tube wells common in rural Myanmar. At a depth of 7.3 meters (24ft), the pump can yield 15,000 liters (4000 gallons) of water per day.

Thanks to the Autodesk Foundation, which provided funding for Lotus, for recommending it to our list. Learn more at Proximity Designs. And compare it to the Sun Pumps SDS Submersible Solar Pump in our Solutions Library. 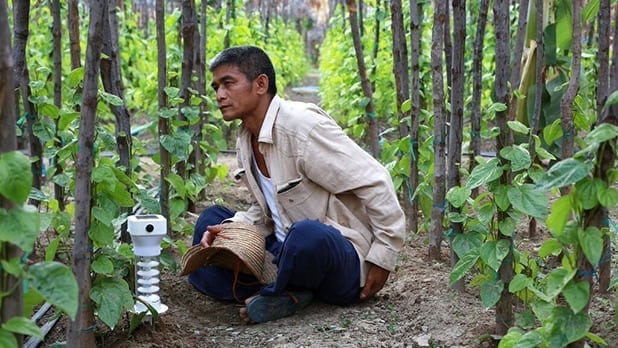 Moisture sensors tell a farmer when to irrigate and when the crops have had enough. Researchers are developing devices that give intuitive visual readouts that reduce the complexity of using a new digital tool. IDEO.org is testing sensors like the one picture above in Africa and in Myanmar, where the organization has teamed with Proximity Designs to test sensors in the country’s dry region.

A day of measurements reveals the land’s drainage rate, soil type and the farmer’s behavior. In the longer term, weather pattern data emerges.

Thanks to The Autodesk Foundation for recommending this prototype to our list. Learn more at IDEO.org.

The Chameleon is another sensor prototype in testing now in Mozambique. The device, funded in part by the Australian Centre for International Agricultural Research, also gives a visual readout, changing color to indicate moisture levels. 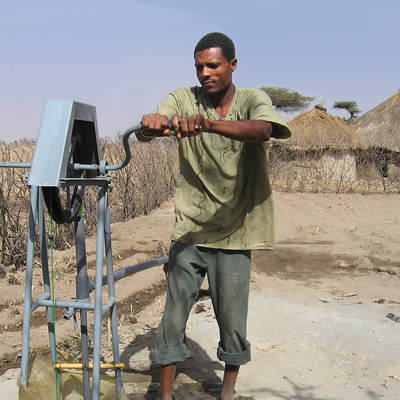 “The use of low-lift pumps in SSA has had a hugely significant adoption rate,” Roberto Lenton, the founding executive director of the Robert B. Daugherty Water for Food Institute at the University of Nebraska, said in the E4C Webinar Managing Water for Food Security. 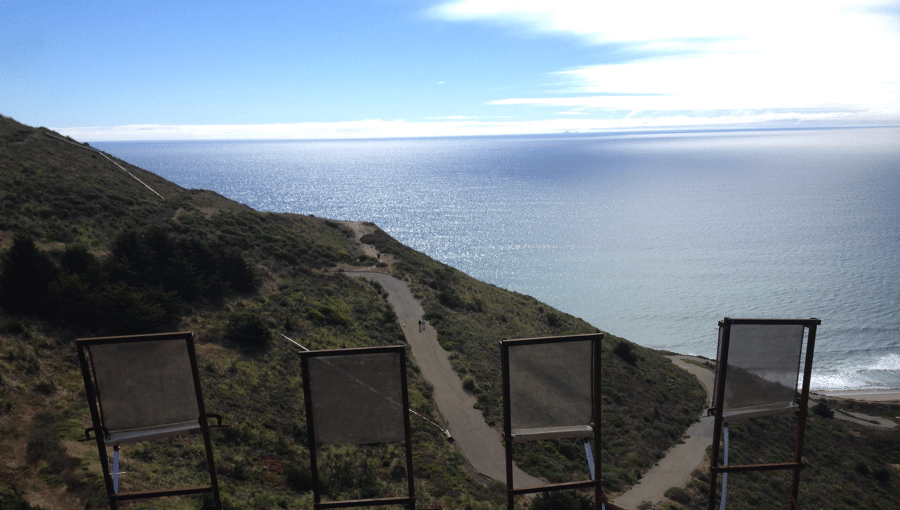 Fog nets work where fog is abundant, but they aren’t quite up to the task in drier climates. To capture water from the air for irrigation, the engineering firm NBD Nanotechnologies is giving the nets an upgrade. NBD is testing its superhydrophobic coating on nets in the semi-arid hills of San Francisco. Data suggest that the coated nets yield five times as much water as uncoated nets. And 50 of them in heavy fog may capture up to 19,000 liters (5000 gallons) of water per day.

Thanks to Autodesk for recommending this device. Learn more at NBD Nano.

Oil expellers and other added value 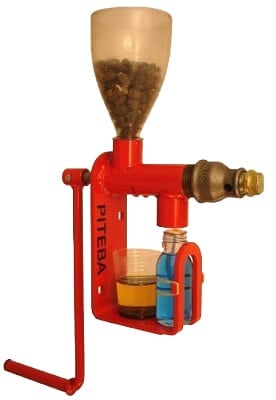 The Piteba Oil Expeller can make olive oil from olives, increasing the value of a crop that grows in dry climates. A farmer can add value by making olive oil on the farm instead of selling the olives to a third party to make the oil. That extra money, managed wisely, improves the farm’s chances of weathering droughts and market fluctuations.

An oil press is just one example of how farmers can add value. In our Solutions Library you’ll find presses, solar driers and nut and maize shellers, all with specifications and prices for side-by-side comparison. 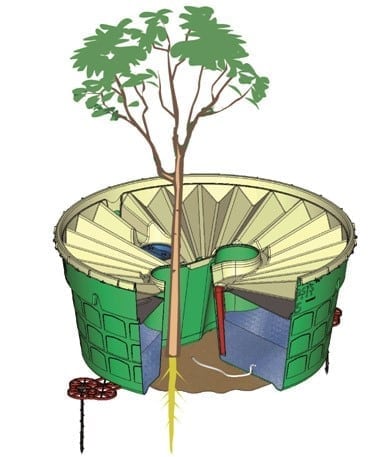 The Groasis Waterboxx mimics animal excrement by protecting seeds, locking moisture into the soil as they sprout. Birds and other animals excrete seeds and the dung adds and retains moisture in the soil around the seed. Groasis, invented by Pieter Hoff, is a 20 liter (5 gallon) barrier placed around the seedlings of fruit trees and shrubs in desert and semi-arid farms. The device gathers rain and dew in a reservoir under the plant, preventing its evaporation and allowing it to nurture the plant over time.

The device is an awardee of Securing Water for Food: A Grand Challenge for Development. Thanks to SWFF for the recommendation to our list. Learn more at Groasis.

The Buried Diffuser is a square or rectangular plastic plate with a 5mm layer of silica that is connected to an underground drip irrigation system. The plate is buried near the roots of the crops and diffuses water from the drip system around and underneath it. The plates can last up to 30 years without maintenance.

In tests on farms in Tunisia, the system increased crop yields. It also reduced the cost of crop production and the amount of water needed by 30 percent compared to traditional drip systems.

The device is an awardee of Securing Water for Food: A Grand Challenge for Development. Thanks to SWFF for the recommendation to our list. Learn more at Chahbani Technologies.

The SWAR system allows orchards to flourish in the dry regions of Andhra Pradesh near India’s southeastern coast. The process begins with rainwater catchment. Then, using a treadle pump, the farmer pushes the rainwater up to a holding tank above the field. Gravity draws the water down through PVC piping to sealed plastic jugs placed inside of ceramic pots. The pots are buried near the trees. Water drips slowly out of the jugs into the pots where it seeps into the soil. Tests suggest that it reduces water by 80 percent compared to above-ground drip systems.

The device is an awardee of Securing Water for Food: A Grand Challenge for Development. Thanks to SWFF for the recommendation to our list. Learn more at SWAR.

A new forced-air stove design intended to make clean stoves burn even cleaner could double as a wood-powered electricity generator in the home. The generator may be the only means of charging cell phones and operating radios in homes that need clean cook stoves most. The device is a fan that attaches to the side of a “Rocket Stove,” one of the most widely distributed clean-burning stoves in the world....