Tips and tools for rapid prototyping 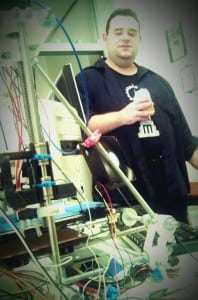 Boards studded with the sliced halves of ping pong balls lean against the wall of the New York City hackerspace, Hack Manhattan. The balls stand in for pixels in a six-by-eight-foot game of Pong. Yes, that Pong, from Atari and the golden age of video games. This gigantic resurrection of the game is mind-controlled, meaning the joysticks are actually brainwave-reading headgear. The project won accolades and now shares the hackerspace with a 3D printer, a folding table cluttered with empty paper coffee cups, a beer can and plastic bin of parts, and a skinny chalkboard that wraps around most of one wall.

We visited Hack Manhattan when most of its members were at their day jobs. Justin Levinson gave us a tour and told the story of the Pong board. Like many real-world objects, the board began on a computer screen.

Members of Hack Manhattan employ 3D modeling and printing to rapidly prototype their ideas and test them in the real world. Shortly after the tour, another hackerspace member, Dave Reeves, arrived to demonstrate the 3D printer. He built it, and he’s planning to build a more advanced model. Reeves also had a second, smaller 3D printer in his backpack.

Hack Manhattan’s hardware reflects the trend in tools for rapid prototyping. They’re cheaper and more accessible than ever. And there are a growing number of online and real-world communities that offer help to novice manufacturers.

We asked Levinson and Reeves for advice on the tools of rapid prototyping. We also turned to the international FabLabs network to look at prototyping tools in developing countries. Here are some recommendations. 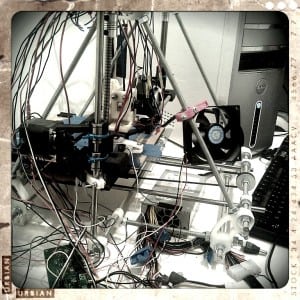 The 3D printer is the go-to tool for rapid prototyping. Costs are dropping and the level of detail (also called resolution in 3d printing) is improving for home printers. They may not be field ready, meaning that a reliable, quick printer that you can fit into a backpack for use on the road may not yet exist. But those are on the horizon.

Beginners may find it confusing to choose a first printer, Reeves says.

“That’s a question I asked myself last year at Maker Faire,” he says, and he settled on a Prusa Mendel Reprap. “But if I was going to buy a new one now, I’d go for an Ultimaker I think,” he says.

Ultimaker, Makerbot and UP printers are suitable for home use. For the Hack Manhattan team, however, Reeves and company are planning to build one of the the new delta geometry printers, the Rostock, which is another Reprap.

Hack Manhattan uses variations of Reprap, which don’t have the highest resolution, but you can use another printer to print out most of the parts needed to build one. So, it’s replicable (and that’s right in the name). 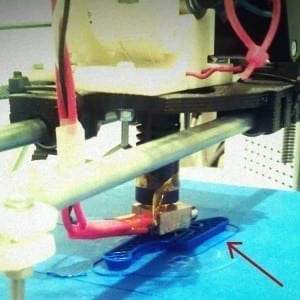 The Reprap prints a bottle opener with dozens of layers of molten plastic. Photo by Rob Goodier

“We’ve been tweaking the design [of their shop printer] for a smaller-footprint ultra-low-cost printer, the Wallace,” says Levinson.

“We’ve done some interesting things like printing plastic bearings instead of buying metal ones, and now we’re working on printing the bearing surfaces directly into the structural parts,” he says.

The really interesting thing about this technology is how quickly it evolves, evident even in the design innovations at just this one hackerspace. A worldwide online community fuels the advance of this technology with little updates like printing bearing surfaces right into moving parts.

For inspiration, see these dozens of 3D printer hacks at hackaday, including printers that print printers (yes, yo_dawg.jpg, we know) and even a shipping container printer.

Novice 3D printer fans will always have help. You may have a hackerspace in your city with people who can lend a hand. And even if you don’t, online open source communities are friendly and seem to have a tireless willingness to help. Hack Manhattan posts this helpful software wiki to help get started.

To scan an object for printing or to design a part that fits to a real-world object, you’ll need a 3D scanner. Reeves is putting the final adjustments on this one, the Spinscan. Including the webcam, the scanner cost $60.

An interesting hack for the Xbox Kinect turns the controller into a 3D scanner. The Hack Manhattan team used a Kinect scanner before they upgraded. Here’s one way to do it. 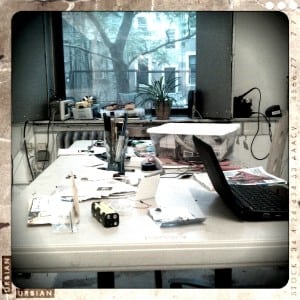 Clutter is a healthy sign for a busy hackerspace. Photo by Rob Goodier

“It’s pretty easy to pick up, but getting useful things out of it takes some doing. The big benefit, to me, is that it’s fast, even on low-power systems, and you can get really, really accurate with the measurements – often more than your printer can provide.”

Rhino is another program that Levinson recommends. While OpenSCAD excels for mechanical part stumbles in working with organic-looking objects. Rhino fills that gap. The program is pricey, but for Mac users, that version is in beta and it’s free for now.

Sketchup is one of the most widely used 3D modeling platforms. Levinson stays away from it, but it has its fans, including the artist behind the construction manual for a cheap, screw-cutting lathe.

If those aren’t enough options, there are other programs such as TinkerCAD, 1-2-3D, and Blender.

3D printers may be catching on in developing countries, but slowly, and many inventors don’t have access, yet. There are some well equipped labs and manufacturing spaces that use them, and they also make use of an interesting array of milling machines, cutters and programming tools. We looked to FabLabs for an equipment list. FabLabs are an extension of MIT’s Center for Bits and Atoms, provide tools to prototype inventions and stimulate local entrepreneurship around the world. Nearly 130 are up and running, many of those in Africa, India, Southeast Asia and Latin America.

See the world’s workshops on an interactive map at iShow, the Innovation show and award by the American Society of Mechanical Engineers.

And for the hackerspace on a budget, maybe the concrete screw-cutting lathe could stand in for a milling machine? We would love to see that put to the test.

Good luck, and please send us photos of your projects.