The CU Boulder Mortenson Center for Global Engineering is pioneering a new vision for engineering for global development, and awarding professionals and students that represent its ethos. The Mortenson Center has called for nominations for its second annual Global Engineering Awards. The awards recognize one student and one professional working to improve the quality of life in underserved communities. Traditional engineering disciplines are eligible, as are fields such as global health, environmental and agricultural sciences, geography, policy, community advocacy and others. Winners will be announced at the awards ceremony on the evening of March 4th. This event is hosted in collaboration with the Colorado Water, Sanitation and Hygiene Symposium, held at the University of Colorado Boulder.

The Mortenson Center is taking the lead on revitalizing the roles and goals of the global development engineer. In a position paper published in the journal Sustainability, Mortenson Center Director Evan Thomas argues that, to date, the products and services designed and deployed in underserved communities have not met expectations for reducing poverty. To correct the course, Dr. Thomas proposes a new direction for the field of engineering for global development, and a new title: Global Engineering.

See: Engineers Are Not Ending Poverty. Time for a Change?

As Dr. Thomas writes, the new Global Engineers should embrace mobile and other technologies that are not strictly “appropriate,” as classically defined. The new toolbox should include sensors, phones, satellite data and other technologies to improve impact measurement. And, critically, the Global Engineer’s role should expand to identify the detrimental effects of policies and practices that perpetuate poverty and to propose improvements to address not just the symptoms but also their causes. 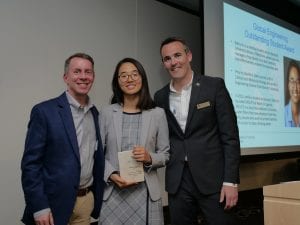 Kathy Ku is a medical student at Stanford University who co-founded a water filter manufacturer in Uganda called SPOUTS of Water and managed a free clinic in the San Francisco Bay Area (USA). Her first experience with Global Engineering was as an undergraduate at Harvard University volunteering in the Dominican Republic with Engineers Without Borders–USA (EWB-USA).

“I had the chance to work with engineers who created a positive impact in the world; I wanted to grow up to be like them.”

Reflecting on her experience with EWB-USA during that time, Ms. Ku says, “I had the chance to work with engineering professionals in the Boston area who continued to use their skillsets to create a positive impact in the world; I wanted to grow up to be like them.” Ms. Ku says.

SPOUTS now employs more than 40 people and has distributed 60,000 filters. After founding SPOUTS, Ms. Ku again employed principles of Global Engineering to her work managing a free clinic in the United States. She drew on her background in operations to improve the clinic’s procedures, using a free online tool that optimized triage and scheduling.

Receiving the Global Engineering Student Award was an honor, Ms. Ku says. “When I first started this work, it was because I was inspired by those around me, and to be able to return to the community almost ten years after that initial spark… was a really special moment.” 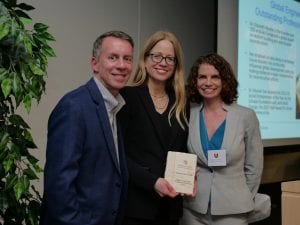 The global disaster recovery sector has evolved under Dr. Elizabeth Hausler’s influence as the founder and CEO of Build Change, a post-disaster reconstruction non-profit that operates in emerging economies. Build Change has been instrumental in shifting policy away from the top-down, donor-driven approach of giving away houses to a homeowner-driven approach of giving people cash and technical assistance. The organization empowers homeowners to make decisions about their new homes, and advocates for permanent buildings rather than emergency temporary shelter. Build Change is also proving that retrofits work, fortifying buildings in disaster-prone regions to prevent the worst damage.

“There is so much good engineers can do in the world, especially when they partner with policy experts, finance experts, and so on.”

“We’re applying a holistic model – engineering, technology, access to finance, capacity building, policy change.  Most organizations specialize in only one part of the construction value chain, we do it all,” Dr. Hausler says.

On winning the Global Engineering Professional Award, she says she is grateful and honored to be the first recipient.

“There is so much good engineers can do in the world, especially when they partner with policy experts, finance experts, and so on,” Dr. Hausler says. 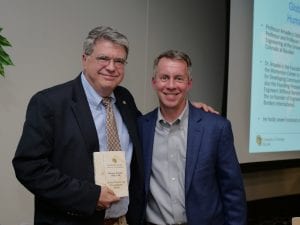 In a surprise announcement, the inaugural awards ceremony also recognized Dr. Bernard Amadei as a Global Engineering Humanitarian. Dr. Amadei is a pillar of the Global Engineering community. He is Founding Director of the Mortenson Center and Founding President of EWB-USA, which is one of three founding organizations of Engineering for Change.

This year’s award ceremony will feature a keynote by former astronaut Ron Garan. Mr. Garan’s view of the earth from orbit has cultivated a planetary conceptualization that he has written about in his book, Orbital Perspective. Mr. Garan spent 178 days in space, returned to work in the US Agency for International Development and later co-founded the social enterprise Manna Energy Limited. Through Manna, Mr. Garan employed an unusual financial model, leveraging carbon trade markets to underwrite programs in clean energy, clean water and remote sensing for impact measurement in underserved communities.

“The problem is that we don’t see ourselves as planetary.”

Mr. Garan supplied the text for his upcoming address that contains this spoiler:

“In my work in Sustainable Development, I, at times, became frustrated at how we keep trying to address issues such as global warming, deforestation, ocean acidification, and biodiversity loss as stand-alone issues. But in reality, they are only symptoms of an underlying root problem.

The problem is that we don’t see ourselves as planetary.”

Learn more about Mr. Garan, his books and his work at rongaran.com.

And nominate someone who deserves recognition as a Global Engineer using the form on this page: http://bit.ly/2Nef3Wq

Can Community-Scale Solar Become the Model T of Clean Energy?

Every single solar project, big or small, gets assembled one at a time on a roof or in a field. But what if you could pre-manufacture solar projects in a factory, instead? Could you do to solar what Henry Ford did to cars and make solar even more affordable and available to virtually everyone? What is “community scale” and why does it matter? The industry defines solar installations in three...