These large aluminum cook pots that are popular in Haiti did not work well on improved stoves intended for distribution after the 2010 earthquake. United Nations Photo / CC BY-NC-ND 2.0

Tech4Dev: Bridging the field and the ivory tower 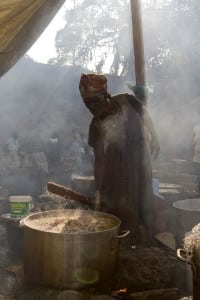 A Haitian woman cooks in a camp after the earthquake in 2010. The pot she is using is too large for the improved cookstove designs that were intended for distribution. United Nations Photo / CC BY-NC-ND 2.0

As relief agencies rallied shipments of supplies into disaster-struck Haiti in 2010, the question of what to do about cooking fuel came up.

One and a half million Haitians had been left homeless by a 7.0-magnitude earthquake that rocked the small Caribbean country on January 12, 2010. On a normal day, more than 70 percent of the country’s 10.3 million people relied on biomass—wood, primarily—for cooking. Aid agencies like USAID and the World Food Programme knew the disaster would intensify the need.

The idea was to import fuel-efficient stoves to distribute in Port-au-Prince. But which stoves?

Kathleen Lask teed up the story to an audience at the recent UNESCO Chair Conference on Technologies for Development in Lausanne, Switzerland. Lask’s team from the Stove Lab at Lawrence Berkeley National Laboratory thought its Berkeley-Darfur Stove, which had been specially designed for the refugee crisis in South Sudan, could be a candidate in post-earthquake Haiti.

Taking it for testing on-site in the disaster area, they quickly found out that hunch was wrong: neither the original stove nor a special adaptation would be suitable for the local population. Turns out, none of the other stoves intended for distribution in Haiti were either.

“All improved cookstoves [designed for Haiti] had poor usability results,” noted Lask, a graduate researcher at UC Berkeley, as she presented findings from the Stove Lab’s work in testing several cookstoves intended for short-term relief efforts in Haiti.

There is no shortage of new innovations built in the name of global development. But more needs to be done to put these innovations in the right context.

The improved stoves were, in fact, more fuel efficient and produced less CO2 than traditional stoves, but they took 15 minutes longer to boil water, they could not support the large pots that Haitian cooks favor, it was hard to shift the coals to adjust the temperature and they tended to cook unevenly, burning food in the center and leaving it partially cooked on the edges. These were issues with stoves that relief organizations planned to distribute, but before Lask’s team looked into it, nobody had seemed to know there might be a problem.

There is no shortage of new innovations underway, built in the name of global development. But the key takeaway from Lask’s discussion is that more needs to be done to put these innovations in the right context, and furthermore, to share those lessons among the development community. For technology, that means better assessment of existing solutions relative to their adoption and long-term use. 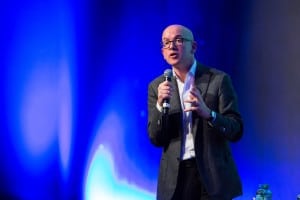 “We are now in a world with nearly ubiquitous information access,” observed Yves Daccord, director-general of the International Committee of the Red Cross and keynote speaker at Tech4Dev. Yet, ubiquitous access does not necessarily translate to ubiquitous quality or direction: many delegates posed questions and voiced frustration about where to go to access and share knowledge in their own field. The number of times this question came up over the three-day conference—both in session and in private conversation—suggests that technology design, implementation and research is often happening in a silo. “Doing more is not enough. We need to collaborate,” Daccord said. There were repeated calls for better collaboration across the sector.

Of course, this isn’t a new message. The demand for knowledge sharing, partnerships and cooperation is common in these shared spaces—but most often at the end, as a parting but loose “call to action.” Refreshingly, at Tech4Dev, the case for collaboration was made early and supported by practical reasons: development resources are limited. When people duplicate efforts, they not only waste their own limited resources, they waste the communal ones.

This need for collaboration is no more critical than at the local level, when new technologies—many of them conceived and designed far from where they are meant for use—are introduced. “Building effective science, technology and innovation ecosystems requires knowledge bases inclusive of local technology,” commented keynote speaker Flavia Schlegel, assistant director-general for natural sciences for UNESCO. The message seemed to reverberate particularly strongly among attendees whose work or experience was field-focused.

#T4D2016 Include local knowledge in the solutions and promoting south-south cooperation. My comment: diasporas play a huge role here! — Ricardo A Corredor (@rcorredorj) May 2, 2016

Going back to the example of cookstoves in Haiti, Lack’s research underscores the failure risk of this development framework. “Perhaps because they appear to be simple or “mundane” technologies, it is common to underestimate the difficulty in developing biomass cookstoves that are culturally appropriate and high-performing from the perspectives of both NGOs and local users,” her research states. “As with many technologies, if a cookstove is not adapted for local customs and does not offer clear improvements over familiar, traditional stoves in the metrics important to local cooks, it is unlikely to be adopted and used.” Yet, the Stove Lab team found that this was precisely the problem with many of the stoves designed for short-term relief efforts in Haiti. Worse, the distributors and NGOs had not tested or collected performance data on the models they intended to introduce, meaning they had no certainty as to whether the relief effort would have the intended impact.

A solution may be technically well designed, but if it has not been sculpted in collaboration with its intended beneficiaries, it is almost certain to fail – or at very least, struggle considerably. After all, who better knows the context than potential users? Physical distance, political instability, and a host of other issues can inhibit face-to-face interactions, however. Tackling the limitations of distance has become a sub-sector of development technology in its own right, and the results – remote sensors, monitoring devices, drones, $30 virtual reality glasses that snap over an iPhone – are helping to make the world smaller, better connected and more aware of the lives of others. But technology can never replace close proximity and direct engagement. Nor should it try, Daccord argued.

Close proximity to people and political convergences are central for sustainability and global solutions.Yves Daccord in #T4D2016

The need for direct engagement in the development field is precisely why Ana Gonzalez Forero flew to Switzerland to attend Tech4Dev from Colombia, for the second time. Forero is the founder of an organization called Fundación por la Educación Multidimensional, or FEM, which tackles socio-economic obstacles in Afro-Colombian communities by facilitating co-working projects with outside organizations.

“Being here last time really put my organization’s work into perspective,” Forero told E4C. “I am a field worker – I felt so removed [from this community]. But I realized that FEM has an important role facilitating between our communities and people here with ideas that can support them. It was really eye opening.”

Technology design, implementation and research is often happening in a silo.

Forero added that she hopes to see more direct representation of beneficiaries in these kinds of forums. Other delegates voiced their interest in that idea as well.

“Innovative technologies have an important role to play in our search for sustainable global development. However, technologies by themselves are not enough,” said Silvia Hostettler, UNESCO Technologies for Development Conference Chair. “Tech4Dev is a platform for people to work together towards appropriate, sustainable and scalable technologies leading real impact in the field.”

Cookstoves should come with mosquito nets: A conversation with Cathy Leslie

Cathy Leslie heads Engineers Without Borders USA and has overseen engineering projects in the United States and abroad for 20 years. She has a practiced eye for what works and what doesn’t. She sees the big picture – infrastructure is important – and the details – providing communities with clean-burning cookstoves can lead to a termite invasion. This is what she had to say about the state of development work...