Inventors have recast the bicycle as a cheap power supply for myriad products. The world’s most efficient transportation device now handles everything from poop to ice cream. Several groups are even working on bike-powered laundry machines, including MIT and their “Spincycle” (get it?). Here, we’ve rounded up ten creative ways that bicycles are serving people around the world.

Find more uses for a bicycle, as well as inovative bike designs and sustainable manufacturing materials in our Solutions Library.

Prop a bicycle on a stand, attach this corn sheller, and two people can fill a 90kg sack of corn in 40 minutes, which is about 40 times faster than doing it by hand. One person pedals, the other drops corn into the sheller.

Jodie Wu, a 2009 MIT graduate, and Bernard Kiwia, a Tanzanian bike mechanic and inventor, put their heads together to create the corn sheller in 2008. Wu founded Global Cycle Solutions, a social enterprise that took the sheller to villages around Tanzania. GCS has now merged with Greenlight Planet. Here’s a timeline of their journey that might interest startup founders and entrepreneurial designers of tech for good.

In the years since GCS developed its version, another organization, called Maya Pedal, has taken a leading role in the magic of bicycle-powered corn mills. Not content with just mills, however, Maya Pedal, an NGO based in Guatemala, does the heavy lifting in this list of innovative uses for the bicycle. Maya Pedal offers a catalog of bicimáquinas. Bicimáquinasare are pedal-powered machines that do work in the home, on the farm, on the road and in small businesses. Each bicimáquina is handmade in Maya Pedal’s workshop using used bikes, concrete, wood, and metal.

The open source ethos runs strong in Maya Pedal. Notably, each design includes a Sketchup model to help makers build their own. Read on for more bicimáquinas below.

Afrigadget posted this short video of a bicycle-powered knife sharpening machine at work in Nairobi, Kenya. Peter Karagu turned a bicycle into a knife sharpener that he can use while pedaling in place. The newer video above shows another knife sharpener on a bike, this one operated by Nasim.

In some of the world’s underserved communities this machine could be a viable business as a neighborhood sharpening service. It may even catch on as a novelty in wealthier areas.

Strip for parts to make a wind-powered generator 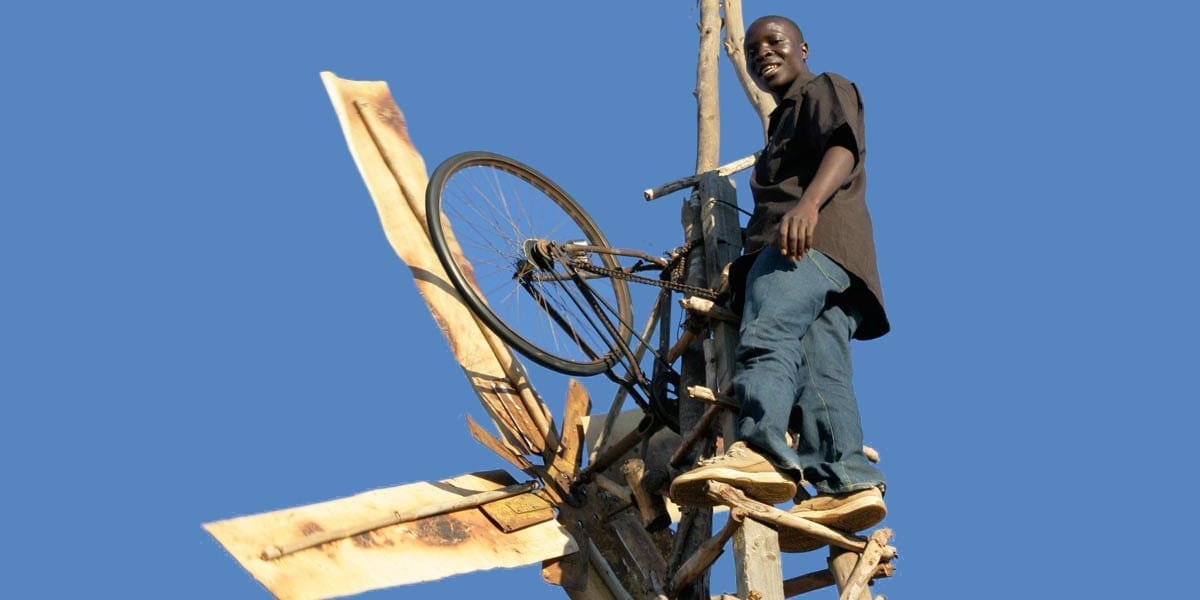 William Kamkwamba built his now-famous DIY wind-powered generator from salvaged parts, including a bicycle frame, sprockets and chain. As he told E4C, the windmill generated power for lights that Kamkwamba installed himself in his home in rural Malawi when he was 14 years old.

Bike parts make an appearance in another wind-powered design: a family-sized generator for homes in rural Guatemala. Catapult Design, a San Francisco-based engineering firm, pieced together the prototype of a generator using a DC motor and a bicycle chain and sprocket. The generator is designed to link to a vertical-axis wind turbine that is made from locally sourced parts in rural Guatemala. For more on the project (now discontinued), see E4C’s coverage here.

A pedal-powered mobile phone charger may be little more than a conversation starter on the road or trail in the context of the abundance of spare batteries and solar chargers. In the world’s underserved communities, however, charging phones is a viable business. A pedal-powered charger might be a necessity and even  make some money. Make offers the guide above that shows how to modify a bicycle-powered headlight to charge a phone. The build shows how to convert the light’s generator from AC to DC and scale it down to a safe voltage for charging a phone.

An alternative build by Addyology in the video below starts with just a small block of wood and shows how to build the generator as well.

Waterborne disease is a leading killer of children under age five worldwide, and a crippler of economies, keeping children home from school and adults home from work. In communities where open cook fires are the first line of water treatment, combining the world’s most efficient transportation device with a water filter is a good idea. Two bicycle-powered water filter designs caught our attention.

Nippon Basic Co. invented Cyclo Clean, a bicycle rigged with a pump to draw water from a river or well and a robust, three-filter system to purify the water. The filters are designed to last without replacement for two years, and the tires are puncture-proof. It can filter three tons of water in 10 hours.

In another version of the bike filter, students at the University of Santa Clara demonstrate their build in the video below. 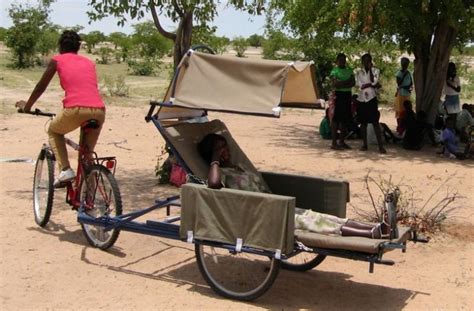 A bike can be an ambulance

The Namibian bicycle ambulance, described at Appropedia, is “stretcher on wheels” to transport patients, particularly those suffering from HIV/AIDS, to the nearest healthcare center. Our Solutions Library has details: Namibian Bicycle Ambulance.

Practical Action has published a free construction manual for an alternate version of the bicycle ambulance, a two-wheeled trailer hitched to the back of a bicycle. The carriage has enough room for two people to sit or lay, and it is equipped with a sun shade and shocks to make the ride more comfortable for an injured person.

Borne of a love affair divided by a river, this amphibious bicycle transforms into a pedal-powered watercraft. At the shore, floats drop down from the wheels and the vehicle takes its rider pedaling over water to visit his love interest at her inconveniently located home. Anil Gupta, founder of the Honeybee Network, has called the amphibious bicycle an example of highly creative innovation among his peers in India. 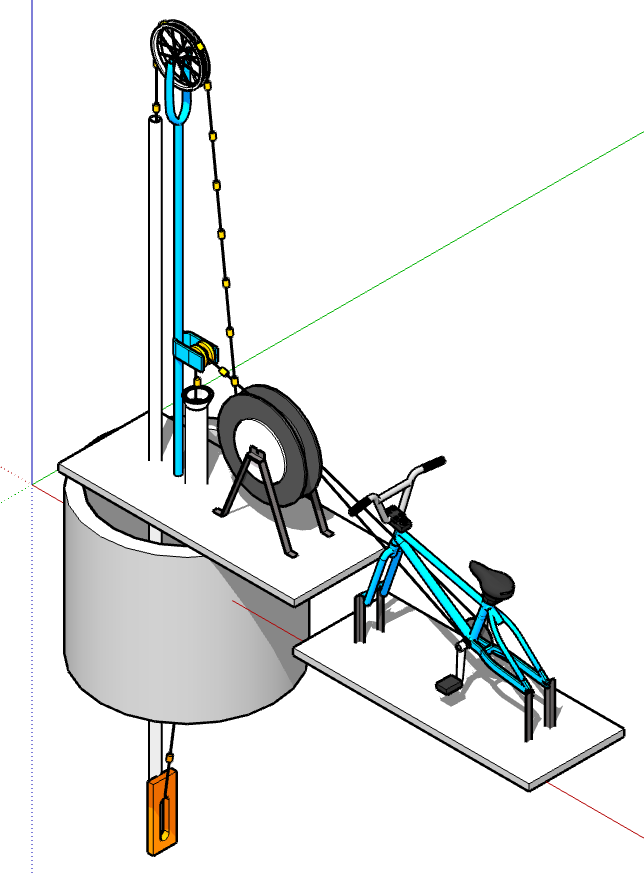 Bikes can power water pumps for drawing well water, irrigation and even lawn sprinklers. Maya Pedal developed the bicycle-powered rope pump pictured in this screen grab of a Sketchup model. This pump draws 20-40 liters (5-10 gallons) per minute from wells and boreholes up to 30 meters (100 feet) in depth.

Want to build your own? See the Sketchup model on this page and a photo gallery in this pdf.

Pump out a pit latrine

In neighborhoods where pit latrine maintenance is sporadic and raw sewage can sometimes overflow into the street, a mobile, low-cost poop-pump can reduce the spread of disease and save lives, not to mention add a little dignity. A team of engineering and business students turned a bike into a latrine pump and built a business around it. That startup, called Sanergy developed a waste-to-energy process for use in communities that lack centralized sanitation infrastructure in low-income countries. Sanergy has discontinued the bike pump, but its spirit lives on in our hearts. We told their story here. 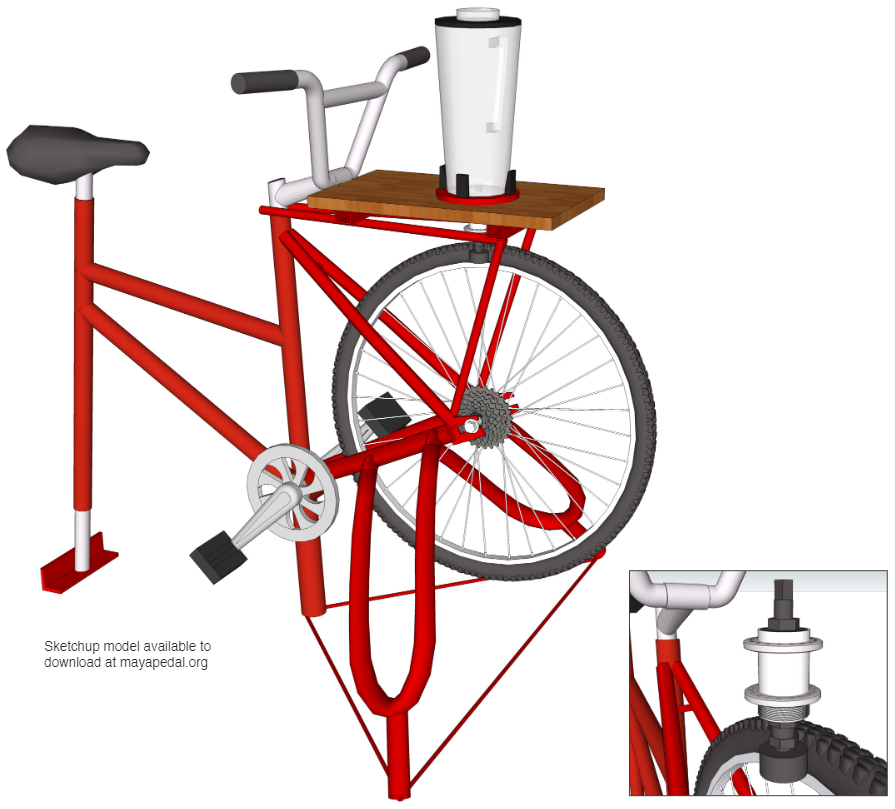 Maya Pedal developed a blender that attaches to a bicycle. It is best used with a stand to keep the bike stationary. On the other hand, though, smoothies on the go might not be such a bad idea. The organization offers a Sketchup model for motivated makers, cyclists and adventurous smoothie lovers. Here’s how Maya Pedal uses the blender:

“Here at Maya Pedal we use it to blend refried beans, soups and pasta sauce. It’s enjoyable to use and quieter than an electric blender. The engine will never burn out, so long as you keep it fed with beans and pasta sauce.”

Austin Alexander oversees efforts to increase diversity, equity, and inclusion at Xylem in her role as Vice President of Sustainability and Social Impact at the global water technology company. Since she joined Xylem in 2013, Ms. Alexander has worked in customer service, sales engineering, and investor relations. And while her titles were changing over the years, she was volunteering with Watermark, Xylem’s corporate citizenship program. Watermark provides access to water and...